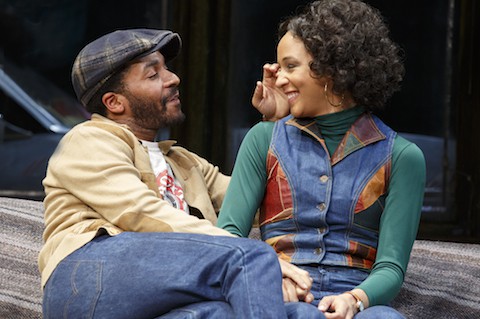 There are people we encounter every day about whom we may not think very deeply — like the grocer behind the cash register, or the Uber driver depositing us safely home after a long night.

In Jitney, which opened January 19 at the Friedman Theatre, August Wilson peers into the lives of men steering gypsy cabs around Pittsburgh’s Hill District. The year is 1977, and the mostly Black neighborhood is staring down the fate of foreclosures and gentrification. But Manhattan Theatre Club’s beautifully realized production finds hope in Wilson’s detailed portraits of men so often marginalized and rarely represented with such loving detail. 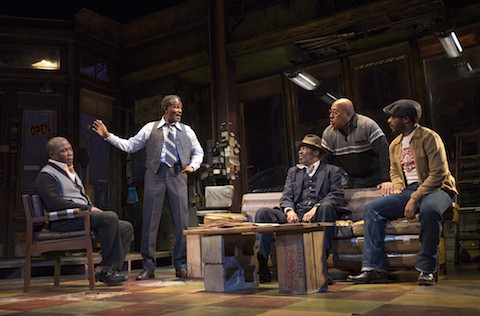 Jitney first premiered in 1982, and is the final of Wilson’s 10-play Pittsburgh cycle to be produced on Broadway (Fences is perhaps the best known in the series; it was last on Broadway in 2010 with Denzel Washington and Viola Davis, who now lead the film adaptation). Each entry in the cycle examines Black life in the city during a different decade of the 20th century (Seven Guitars is set in the ‘40s, Fences in the ‘50s, and so on).

We’re inside a rundown dispatch station, where a rotary payphone alerts the men to their pickups, and a chalkboard keeps track of who’s up next. Becker (an excellent John Douglas Thompson) owns the business and employs four guys we come to know well. Youngblood (Moonlight’s André Holland) is both a striver and a hustler; his girlfriend (and mother of his young son) thinks he’s cheating on her, when he’s actually working two jobs and saving up to surprise her with their next big step. 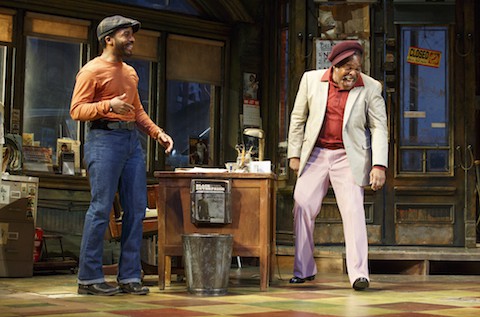 This being the ‘70s entry in the cycle, we’re also treated to some particularly colorful characters. Anthony Chisholm, who also appeared in an off-Broadway production of Jitney in 2000, plays aging alcoholic Fielding, an equally funny and heartbreaking font of wisdom from his lifetime of experience. Michael Potts plays veteran driver Turnbo, a hot-tempered busybody, and Harvy Blanks, another alum of Wilson’s Pittsburgh cycle, plays Shealy, a sartorially adventurous bookie, who uses the dispatch phone to take lottery numbers.

The main drama goes down when Becker’s son, Booster (The Americans’ Brandon J. Dirden) is released from prison, where he served 20 years for murdering a woman who falsely accused him of rape. Becker’s first wife, and Booster’s mom, died shortly after his sentencing, and Becker has never forgiven his son for becoming a disappointment. 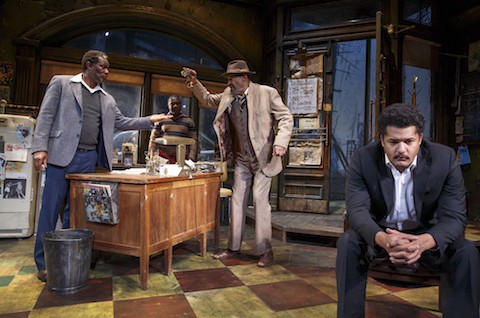 Under the direction of Ruben Santiago-Hudson, the ensemble functions as a family of sorts, and the play a kind of variation on a living room drama. Through the ins and outs of their days and how they relate to one another, we come to see what getting behind the wheel means to them; for Youngblood it may be a road to a better future, while an old man like Fielding is simply waiting out the clock. Wilson explores these different life stages of Black men in America, and how their experiences are shaped by the history of the 20th century.

As the guys spend their days shuttling people to various destinations, the drivers’ own journeys always lead them back to the same place where they started. With the added perspective of 30-some years, the heart of the play’s central metaphor is as resonant now as ever.