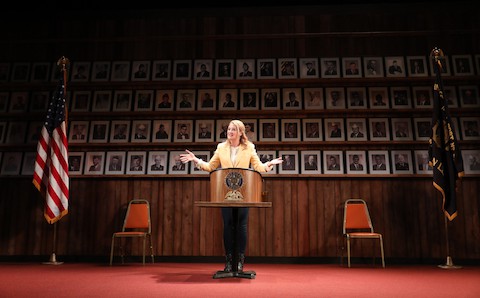 When writer-performer Heidi Schreck was 15, she traveled the U.S. giving speeches about the Constitution for prize money that paid her college tuition. As an origin story, it sounds almost impossibly quaint. Who can imagine mustering any such civic zeal today? As last week’s senate hearings proved, women’s full humanity is still on trial more than 200 years after being omitted from our founding document. Schreck interrogates the legacy of America’s legislation of women by revisiting those teenage debates in What the Constitution Means to Me, which opened off-Broadway tonight.

The result is by turns deeply funny, heart wrenching, inspirational, and one of the most searing and enlightening pieces of political theatre in recent memory. If you have been paying attention and are mad as hell, if your faith in America has been tested past the breaking point, if you feel like putting your head between your knees and wailing until your voice goes hoarse, get yourself to New York Theatre Workshop. You’re in excellent company. 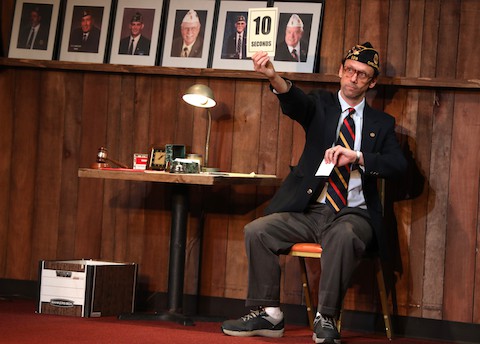 The rules of competition, as laid out by Mike Iveson (playing an American Legion moderator, and later himself), encouraged young speakers to make their arguments personal by demonstrating how the Constitution’s legalese actually affected their lives. Schreck takes this approach to the entire piece, illustrating specific clauses with family lore that reaches back through generations of women.

Her great-great grandmother was considered a “good immigrant” when she arrived from Germany — after her husband ordered her from a catalogue. Her official cause of death was ‘melancholia’ at the age of 36. Grandmother Schreck’s second husband was horribly abusive; Schreck’s mother is the one who turned him in. 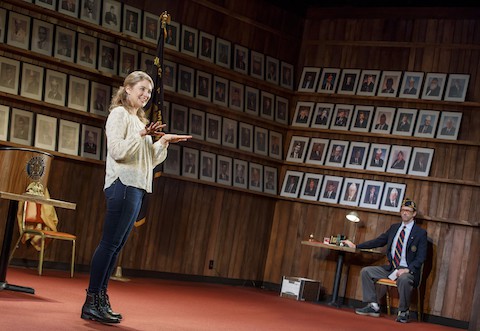 “What does it mean,” Schreck asks, “that the document will not protect us from the violence of men?” It was the most urgent question coursing through everyone’s veins when I attended the show on Thursday, September 27, after millions had spent the day rapt by starkly contrasting testimony regarding Christine Blasey Ford’s alleged sexual assault by Supreme Court nominee Brett Kavanagh.

The statistics are startling, but nothing new. As Schreck puts it, “more American women have been killed by violent male partners in the last century than Americans have been killed in wars, including 9/11.” Not just any men, but their own romantic partners. “I think you can feel it kind of humming underneath… everything,” Schreck says of this fact. That night it felt more like a roar, one that will likely continue to resound for some time. 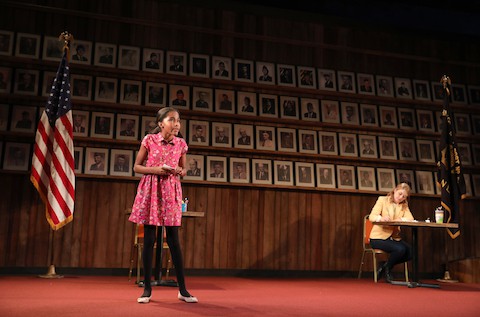 Schreck, who began developing this piece 10 years go, is a remarkably sincere storyteller with a gift for remaining uncannily present in the room and in the moment. When a cell phone went off in the front few rows, she actually thanked the offending patron for providing a release valve to a particularly emotional moment. In Schreck’s hands and under Oliver Butler’s direction, What the Constitution Means to Me feels unmistakably alive — like a vital conversation, a sit-in, a seance of sorts for the soul of the country. It even turns into a live debate, when an real teen debate champ comes out to spar with her (a preternaturally sharp Rosdely Ciprian the night I attended).

“My mom says when you get worried that everything is moving backwards, that things are getting worse instead of better,” Schreck says, “you should imagine a woman walking along a beach with a dog.” Picture the dog scurrying back and forth, but recognize that the woman continues to move forward. The world has little choice but to follow.

Recent theatre features…
Trans Representation Comes at a Price in ‘The Nap’ on Broadway: REVIEW
Dangerous Nostalgia Gets a Glow Up in ‘Pretty Woman: The Musical’ on Broadway: REVIEW
New Musical ‘Be More Chill’ Is Like an Incel’s Answer to ‘Mean Girls’: REVIEW
New Go-Go’s Musical ‘Head Over Heels’ Is a Goddamn Queer Delight: REVIEW
Get in, Losers: The ‘Mean Girls’ Musical Is Fun as Hell: REVIEW