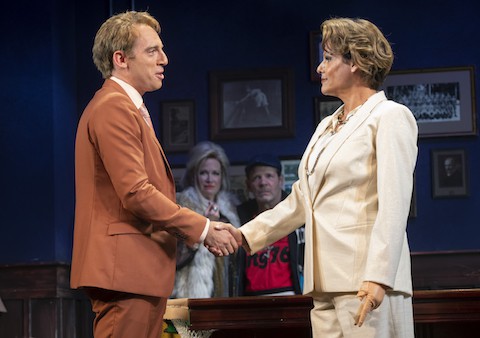 Two hours and change is time enough for a substantial snooze. Who couldn’t use one right about now? But if you’d rather spend as much time inside the Friedman Theatre, playwright Richard Bean’s The Nap quite bravely insists that its title relates to another beloved pastime. That would be the fuzzy surface of a snooker table (billiards’ British cousin), like the one that sits center stage for much of this head-scratching comedy, which opened on Broadway tonight.

The biggest question hanging over the Manhattan Theatre Club production is, what are we doing here? It’s doubtful the Venn diagram of those who follow professional snooker on the telly and patrons who pony up for a Broadway show has substantial overlap. Maybe snooker will be made into a metaphor for the state of Britain, or mankind and his innermost battles. Maybe the latest from the playwright who made James Corden into a star with One Man, Two Guvnors will be such a laugh riot that we’ll forgive its not adding up to much. Alas, no. 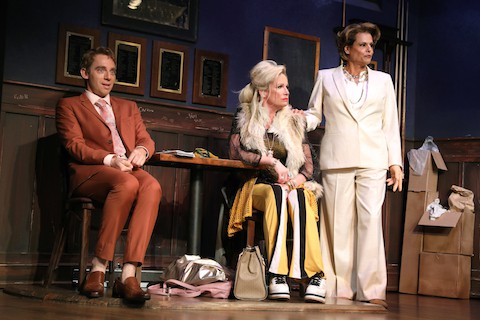 If you’re reading this review, it’s likely the inclusion of Alexandra Billings among the cast that piqued your interest. Would it surprise you to learn that her character follows in a long and worn out tradition of queer villains? Or that her character’s trans identity is the butt of numerous tired jokes and punchlines involving mixed-up pronouns and gendered expectations?

I’ll admit, it came as a surprise to me that before her entrance, a reference to her “operation” includes a joke that compares her bygone penis to “a dead German hanging out the window.” And that, as her character was a gangster before transitioning, they wonder whether she poses the same threat given that “she’s a woman now.” And that her character is so absurdly called… Waxy Bush. (The surname derives from her owning beauty parlors that offer bikini waxes; for no similarly discernable reason, the only South Asian character’s name is Mohammad Butt.) 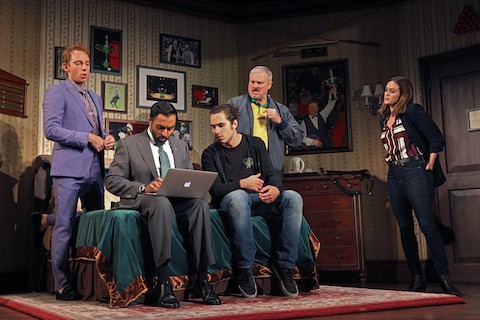 Under Daniel Sullivan’s direction, the play sputters to take off as a farce and lacks the tautness or suspense of a madcap caper. (You may even spot the rub halfway through.) At the outset, Waxy asks our honorable leading man and boffo snooker player (Ben Schnetzer) to throw a game in the world championships so she can win a bet and earn back the cash she’s already invested in his success. A team of investigators is sniffing around trying to bust her; his parents are knocking around too, because the tournament’s on his home turf of Sheffield. Games are played, money is talked, jokes land but more often fall flat. 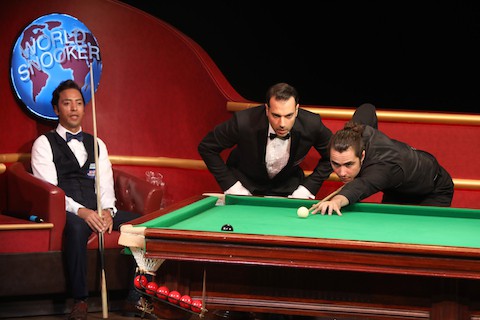 The good news is, Billings is the best part of the show, making the most of her character’s cheap if often funny recurring gags. One of them is her one wooden arm (don’t ask). The other is Waxy’s tendency to use the wrong word with conviction (e.g. “Whether she slept with him or not is irreverent!”). That her role has been cast with a trans actress should feel like a win; given Bean’s bottom-barrel humor here, it’s clear that using a man in drag would suit the play’s tone just fine. But Billings deserves better, and so do we.

Recent theatre features…
Dangerous Nostalgia Gets a Glow Up in ‘Pretty Woman: The Musical’ on Broadway: REVIEW
New Musical ‘Be More Chill’ Is Like an Incel’s Answer to ‘Mean Girls’: REVIEW
New Go-Go’s Musical ‘Head Over Heels’ Is a Goddamn Queer Delight: REVIEW
Get in, Losers: The ‘Mean Girls’ Musical Is Fun as Hell: REVIEW