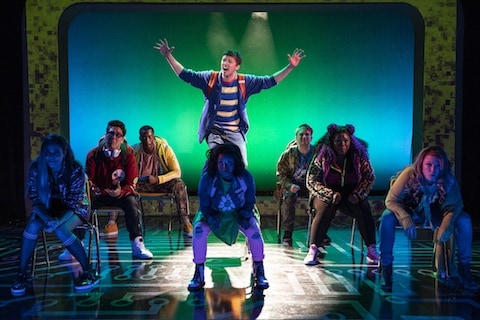 If every high school dram-com is about fitting in, each one needs something to set it apart. Mean Girls has a riotous script full of sharply drawn characters; Dear Evan Hansen has an inspired score with a vivid emotional center. Be More Chill, a frenetic and unnerving new musical that opened off-Broadway tonight, has none of these things.

What it does have is an already-fervent fan base (the limited commercial run sold out prior to opening) and a supercomputer chill pill that promises to make kids cool. It’s easy to see why the story struck a chord with young audiences online following its 2015 premiere at New Jersey’s Two River Theatre — an every-spaz trying to survive high school hell is standard YA fare (the musical is based on such a novel by Ned Vizzini). Just add propulsive pop-rock, and stir.

But Be More Chill is as confused and un-self-aware as a hormonal teenage boy — and nearly as reckless. 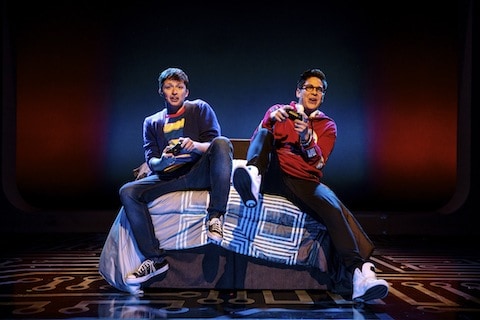 Fitting then, that it begins with one grousing in song that his porn won’t load so he can beat off before school. It’s funny, sure, and perfectly natural (no shame!). It’s also our first sign that the musical, with score by Joe Iconis and book by Joe Tracz, considers frustrated male desire its primary problem in need of solving. Not by teaching its protagonist that he’s not entitled to the woman he wants, or that he should simply be himself and love will find a way, but by tempting him with a pill that helps him say all the rights things to score.

Jeremy (Evan Hansen alum Will Roland) doesn’t want to be a hero, he tells us, he just wants to survive — and nab a date with Christine (Stephanie Hsu), an equally spastic drama nerd. “Accept that you’re one of those guys who’ll be a virgin ‘till he dies,” he laments after botching their first encounter. It seems the only thing standing between Jeremy and life as an incel is that magic little pill. 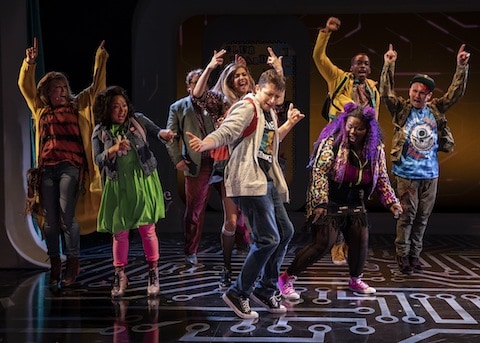 But of course, she isn’t. 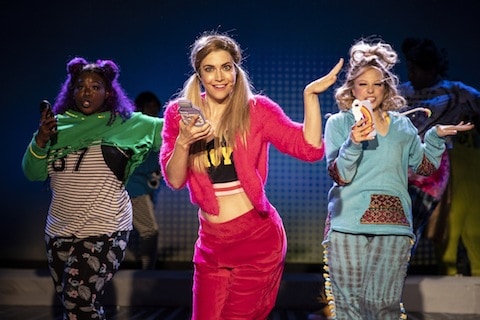 Psychoanalysis might reveal that Jeremy’s absent mother and mopey father, who refuses to put pants on, are the source of their son’s issues with women. For now we’ll have to lay them at the feet of Be More Chill’s creators (including director Stephen Brackett), whose retrograde lens goes beyond the production’s Atari-inspired aesthetics and harebrained gender politics.

As the pill’s effects turn less-than-innocent, the ensuing dread recalls the sort of bygone orientalist panic distilled in 1980’s “Turning Japanese” (the pill hails from Japan). Undecipherable characters rain down ominously in projection (what they say doesn’t matter, only that they cannot be understood) as Jason Tam, playing an avatar for the pill embedded in Jeremy’s subconscious, dons increasingly nefarious-looking wigs. 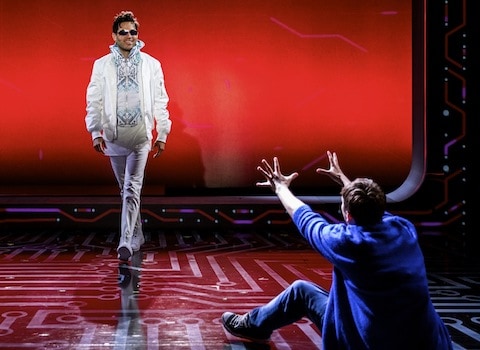 It’s an unfortunate blindspot in a show already careless of the underlying message it’s delivering to young fans. Of course, the pill doesn’t exist, but the advice it serves Jeremy — stand up straight, play it cool, “you want someone to like you, hate who they hate” — doesn’t sound so absurd. “Everything about you is so terrible,” Tam’s character sings to Jeremy. We’re meant to laugh, but he’s hardly joking.

In the end, voices continue to echo in Jeremy’s head, the loudest of which he says is his own. The problem is, he still hasn’t learned that the only thing he needs to be is more…himself.

Recent theatre features…
New Go-Go’s Musical ‘Head Over Heels’ Is a Goddamn Queer Delight: REVIEW
New Rock Opera from ‘Hedwig’ Creator, ‘This Ain’t No Disco’ Is Right About That: REVIEW
Boys Will Be Boys in ‘Straight White Men’ Starring Armie Hammer and Josh Charles: REVIEW
Idina Menzel Opens In Off-Broadway’s ‘Skintight,’ a Daddy-Twink Romance Where ‘Hot Is Everything’: REVIEW
Starry Broadway Revival of ‘The Boys in the Band’ Lends Gay History a High Sheen: REVIEW
Get in, Losers: The ‘Mean Girls’ Musical Is Fun as Hell: REVIEW