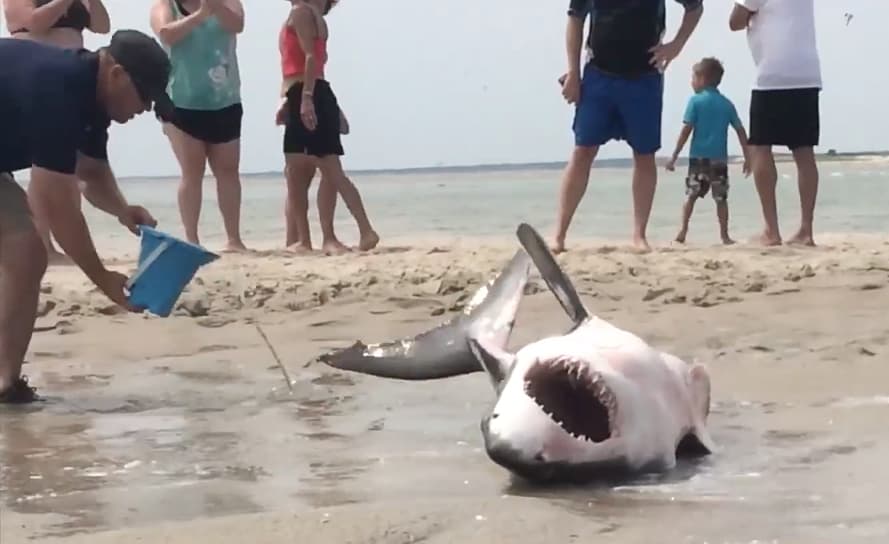 We’ve written here before about the proliferation of great white sharks off the coast of Cape Cod, particularly in the area around Chatham, Massachusetts, where the grey seal population has exploded in recent years. The people of Chatham are very aware of the conservation efforts underway by the Atlantic White Shark Conservancy to track, count, and help the species, so yesterday, when a juvenile white shark beached itself in an inlet while it was hunting seagulls, beach-goers pitched in to save it.

And the shark rescue worked.

You’ve probably seen at least a news clip of the action if you’ve been anywhere near Facebook in the last 18 hours, but below are two full clips of the action, which will restore your faith in humanity (at least for a little while).

Here is the initial footage of the shark on the beach as rescuers douse it with water, and the AWSC hooks it to the boat to be dragged back in to the water:

Chatham harbormaster Stuart Smith was initially called to help around 1:30 p.m. When he arrived, he saw 30 to 40 bystanders, with several people pouring buckets of water on the shark’s body to keep him breathing. The people looked like “a bucket brigade putting out a fire,” Smith said.

“Twenty, 25 years ago, they wouldn’t be exactly helping the shark. They’d be harming the shark. But now every single person on that beach was trying to assist it,” he said. “The people on the beach made the difference.”

Here is further video from the Atlantic White Shark Conservancy which shows what happened after the researchers led the shark away in the boat to tag and release it: