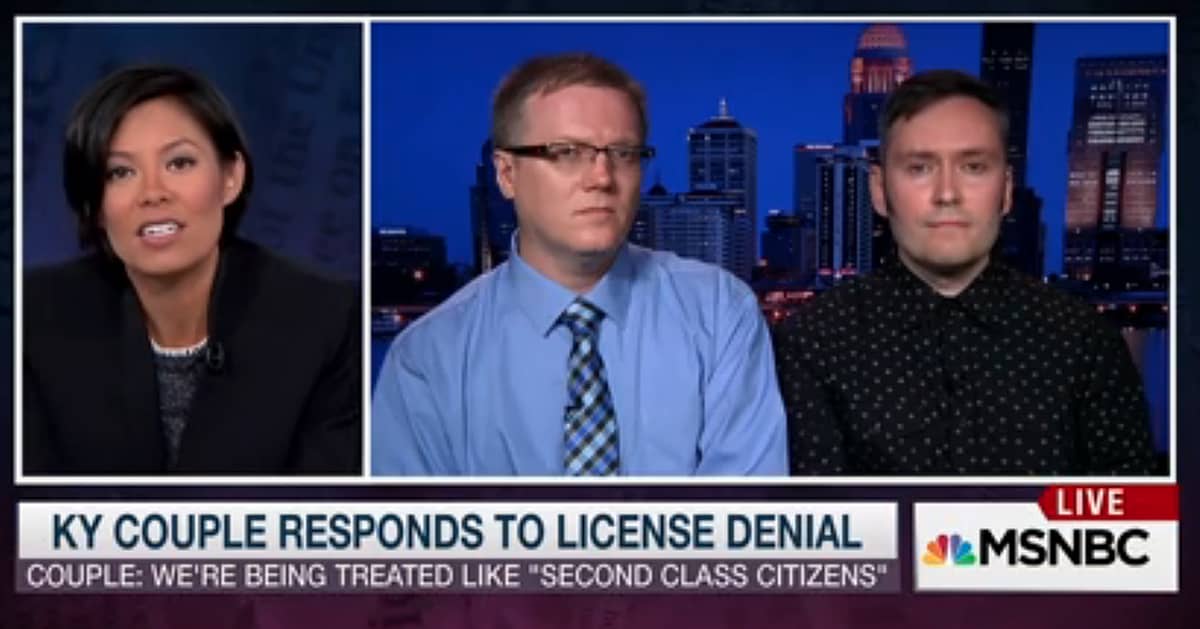 Moore was asked to respond to Liberty Counsel attorney Mat Staver’s comments on Hardball that Davis’s ‘religious freedom’ is not being accommodated.

“I think that what Kim Davis wants is to be a martyr. I think that it makes me feel terrible that we would accommodate someone so that they can discriminate against a minority group or a specific group of people. I feel like that’s what they’re asking for is an accommodation to discriminate.”

Wagner also asked Ermold whether they’ll go back for a fifth try.

“I don’t know that I could handle another rejection to be honest with you. It seems to be getting worse and it’s escalating over time. After the rejection today I spoke with our lawyers on the phone and I don’t see a need to go back. The next time that we go back I really want it to be that we’re getting our marriage license. I was so disappointed today. I thought that we were going to walk out of there and we were going to be holding that license high up in the air, and we were going to be saying ‘we’re getting married.’ And that is not what occurred today. And it’s just overwhelming. It’s overwhelming.”

Supporters for and against Davis assembled outside the Rowan County clerk’s office yesterday morning and the police were called to disperse the crowds. A crowd of people made it inside Davis’s office and began chanting at the bigoted clerk, “Do your job.” The chant inspired an internet meme and Davis began trending on Twitter.

Davis was soon the lead headline on every news site across the country.

“I’m willing to face my consequences as you all will face your consequences when it comes time for judgment.”

A motion to hold Davis in contempt of court was filed by two gay couples and a U.S. District Judge set a hearing for tomorrow at 11 am. Read the filing here.

Davis released a statement that the question of allowing same-sex marriage “is a Heaven or Hell decision” that centers on her “religious freedom”.

Meanwhile, several of the Republican candidates for president have weighed in on the issue. Rand Paul said that states should get out of the marriage business altogether and Davis’s protest was “part of the American way.” Carly Fiorina said that it was “not appropriate.” Lindsey Graham said that Davis should “comply with the law or resign.”