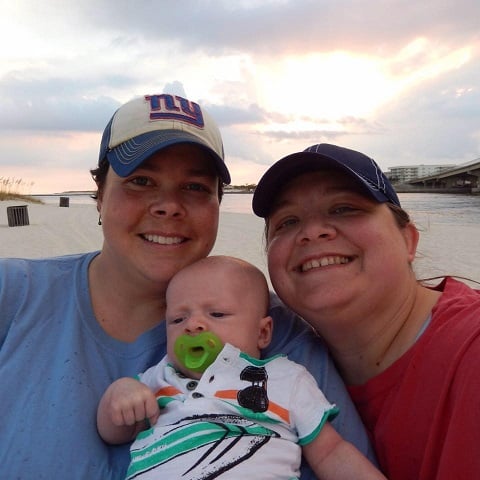 Despite a Tuesday ruling in Arkansas ordering that same-sex couples be listed on their children’s birth certificates, the state is not yet extending that right to anyone apart from the plaintiffs in the case.

However, on Wednesday, Little Rock couple Jennifer and Tracee Gardner-Glaze (above) were refused an amended birth certificate for their 4-month-old son.

“In Arkansas, if a man and a woman are married, and they use a sperm donor and the child is born, the husband is automatically put on the birth certificate, no questions asked. That’s the difference. But if we’re a same-sex couple and we’re married, and we use a sperm donor and our son is born, I cannot be put on the birth certificate.”

According to The Huffington Post, Arkansas Attorney General Leslie Rutledge will be appealing Fox’s decision and is advising state officials to not amend birth certificates.

A Rutledge spokesperson said  that in order to avoid “confusion and uncertainty created by other parts of the order, the Attorney General will ask the Arkansas Supreme Court to stay the decision and will appeal.”

Previous Post: « Gay Nigerians Share Horrific Accounts of Torture, Imprisonment and Death Threats: VIDEO
Next Post: ASAPScience Breaks Down the Science of HIV/AIDS and Our Best Hope for a Cure – WATCH »