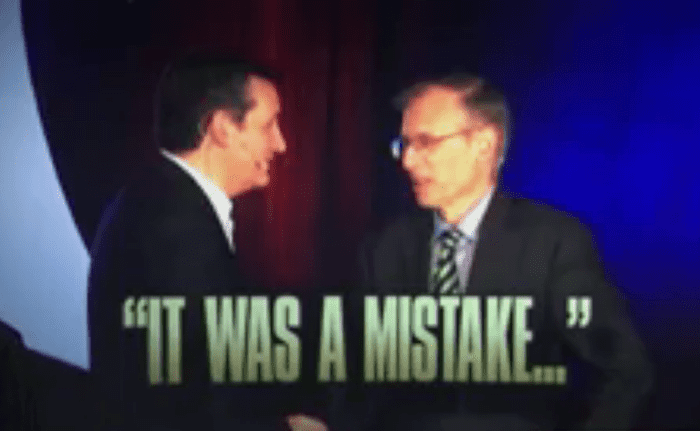 Without much fanfare, Ted Cruz’s campaign admitted late last year that it was a mistake for Cruz to attend Pastor Kevin Swanson’s “kill the gays” rally.

Back in November, we told you about Swanson’s rally in which he called for the execution of homosexuals because such punishment is deemed appropriate in the book of Leviticus.

Rachel Maddow helped bring attention to Swanson’s virulently homophobic call to execute gays in America, saying at the time, “I’m not rounding up to the nearest scary thing. It really was a ‘kill the gays’ call to arms. This was a conference about the necessity of the death penalty as a necessity for homosexuality…part of the way [Huckabee, Jindal, and Cruz] are campaigning for president is by attending a ‘kill the gays’ rally. And I don’t know if that is considered to be a scandal anymore in Republican politics.”

The Cruz campaign is of course the only campaign of the aforementioned three left standing at this point in the race. When asked by Maddow’s staff if Cruz cared to denounce the anti-gay comments Swanson made, comments actually said right before Swanson introduced Cruz on stage at that event, then-Cruz campaign spokesman Rick Tyler commented that Swanson’s remarks were “not explicit” enough to warrant a denunciation or even a comment about the hate mongering. 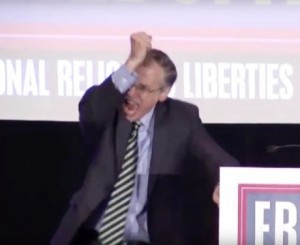 MUST-WATCH – ‘Kill the Gays’ Pastor Says ‘We Are Messed Up’, Proves It with Epic Meltdown: WATCH

So while that call to kill the gays was apparently not explicit and not worthy of comment in November, by December that had changed. At that point the Cruz campaign finally admitted it was a “mistake” to have attended that event.

From a USA Today story dated December 11, 2016, just weeks ahead of the Iowa caucuses:

A tipping point, [Americans United for Separation of Church and State’s Barry] Lynn said, came at last month’s National Religious Liberties Conference in Iowa, where Cruz said, “any president who doesn’t begin every day on his knees isn’t fit to be a commander-in-chief of this country.” Cruz was also introduced onstage by Pastor Kevin Swanson, who, earlier in the conference, quoted a passage of the Bible that he claimed justified the execution of homosexuals.

“This is over-the-top rhetoric, even for a conservative presidential candidate,” Lynn said. “There is a lot of religious fervor going on in [Cruz’s] campaign.”

Tyler, the Cruz spokesman, called Swanson’s comments “reprehensible” and said Cruz has spoken out repeatedly against anyone who calls for hatred or violence against homosexuals.

“Senator Cruz is passionate about religious liberties” Tyler said in an email. “Many respected organizations were sponsoring [the conference], but, given these offensive comments, it was a mistake for Senator Cruz to appear at the event.”

Last week, Rachel Maddow brought attention to the Cruz campaign’s apparent about-face on Swanson’s kill the gays rally while discussing disturbing poll numbers that found significant support among Donald Trump supporters in South Carolina for banning all homosexuals from entering the United States. Maddow pointed out that while Cruz is sticking to his guns, quite literally, when it comes to embracing extremist pro-gun advocates, Swanson’s remarks went “too far.” So, she suggested, we now know where Senator Cruz draws the line on right-wing extremism. Advocating for the execution of gay Americans is apparently ever-so slightly too extreme to warrant his support.

Or maybe it’s too extreme of a view to hold without being flogged in the media. Though it’s worth noting that outside of LGBT news outlets and Maddow’s reporting, very few others paid much heed to Swanson’s event.

Ironically, the Cruz spokesman who declared that it was a mistake for Cruz to attend Swanson’s rally was none other than Rick Tyler, who yesterday was fired for tweeting a link to a video that purported to show Marco Rubio slandering the Bible. Tyler ultimately took the tweet down and apologized on Fox News. However, that was not enough to save his hide.

Watch Rachel dig into how the Cruz campaign changed their tune on Kevin Swanson, below.

Previous Post: « Yet Another Transgender Person of Color Has Been Found Dead in Texas
Next Post: Provincetown’s Herring Cove Beach is Half Gone: VIDEO »