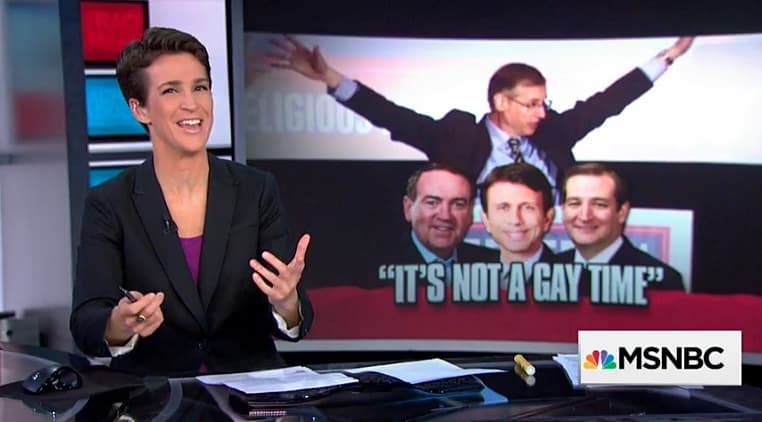 Swanson advocates that gays should be put to death by following “the word of God” in the Bible, and did so there as well.

MUST-WATCH: ‘Kill the Gays’ Pastor Says ‘We Are Messed Up’, Proves It with Epic Meltdown: WATCH

Said Maddow: “I’m not rounding up to the nearest scary thing. It really was a ‘kill the gays’ call to arms. This was a conference about the necessity of the death penalty as a necessity for homosexuality…part of the way [Huckabee, Jindal, and Cruz] are campaigning for president is by attending a ‘kill the gays’ rally. And I don’t know if that is considered to be a scandal anymore in Republican politics.”

Yes, this is the forum where Swanson also told attendees that he’d smear himself with cow manure in an epic meltdown over gay marriage. If you missed it, don’t Check it out HERE.

Swanson also told the crowd that God would smite America because of gay characters in Harry Potter and How to Train Your Dragon.

Swanson has also said that the government should put gay people to death, warned that the Girl Scouts and the movie “Frozen” turn girls into lesbians and blamed natural disasters on gay people and women who wear pants. Swanson has also said that churches accepting gay couples will lead to the persecution, imprisonment and murder of Christians, and wished for the good ole days when country singer Kacey Musgraves would have been hanged for her pro-gay lyrics.

Previous Post: « Trump Suits Up for Christmas Battle: ‘Maybe We Should Boycott Starbucks’ – WATCH
Next Post: KISS Frontman Paul Stanley: ‘If I Were Gay, I’d Be Proud’ – VIDEO »