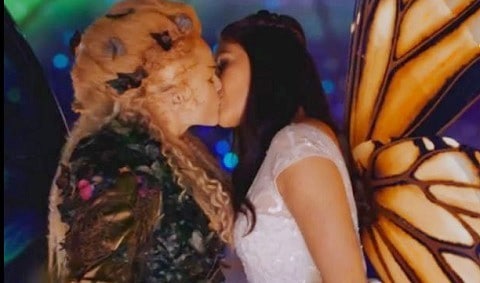 Despite fears of a backlash, viewers have responded positively to a gay kiss in Russell T. Davies’ BBC adaption of William Shakespeare’s A Midsummer Night’s Dream. Davies is also responsible for the original version of Queer As Folk, last year’s genius Cucumber / Banana / Tofu and the Doctor Who revival.

According to English tabloid The Mirror, there were concerns that Shakespeare purists would not take kindly to the new film version which features a passionate kiss between female characters Titania and Hippolyte as well as a death not in the original text.

If ever there was a reason to hold the BBC cloes to our hearts, it was tonights production of "A Midsummer Nights Dream" Simply wondrous!

Asked what such purists would think, Davies said, “They will be perfectly happy. To be a Shakespeare purist means you’re in love with imagination and drama and truth and fun and honesty.”

“Really only idiots might have a problem with that. That’s what plays do [–] they reinvent themselves constantly, for every generation, the next generation will do a new one and this is how they are meant to be done.

“If you’ve got a problem, line up and kiss me instead.”

He added that the changes came about because “I don’t like the end of the play where frankly [Titania] is submissive to Oberon and he gets away with his tricks. It’s very male/female, male/female.”

One Tweeter thought Shakespeare may not be too happy.

Shakespeare may turn in his grave at this version 😨#midsummernightsdream

But he loved it…

Of course, not everyone was best pleased.

#AMidSummerNightsDream Well that was boring! Read the book before – an insult to #Shakespeare! Shame on the #BBC for this piece of rubbish!

Watch a trailer for A Midsummer Night’s Dream complete with Bjork soundtrack below.

Previous Post: « What’s Streaming in June: ‘In & Out,’ ‘Me Him Her,’ ‘Tab Hunter Confidential’
Next Post: Meet the Woofy Winners of This Year’s Bingham Cup – VIDEO, PHOTOS »