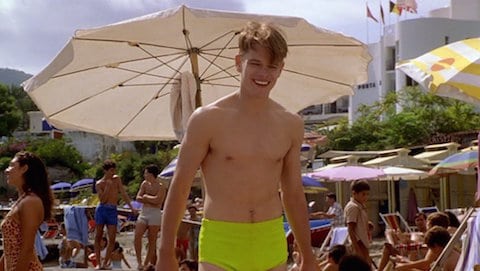 Looking for something to stream while you Netflix and chill? Check out our picks for new additions to streaming services this month below, including enough campy female-centric comedies to make any gurls’ night in memorable.

We’re all about all-female reboots, but, like, who do we have to talk to about an all-male remake of Coyote Ugly? Let’s cast it! OK, Thomas Jane in Maria Bello’s role. Harry Shum Jr. taking over for Tyra Banks. For the ditzy blonde, we’ll throw in Colton Haynes, with Tristan Wilds playing the tough vet our hero has to win over. And who will play the sexy burgeoning singer-songwriter? Nick Jonas, obviously, come on.

We would watch Dolly Parton in anything, including this lightly preachy tale of a small-town choir that’s forced to change up their routine to win the big upcoming competition. If you’ve seen Step Up or Pitch Perfect or Bring It On (the list goes on), the plot will feel familiar. However, in addition to Parton, this film’s cast boasts Queen Latifah, Broadway hunk Jeremy Jordan and Scream Queens star Keke Palmer.

If Joyful Noise doesn’t quite scratch your Queen Latifah itch, this feel-good comedy ought to do the trick. When Georgia Byrd (Latifah) learns she has a terminal illness, she takes carpe diem to a whole new level. It’s a more wholesome, less insufferable version of Eat, Pray, Love.

Sisterhood, societal outcasts and Stockard Channing; what’s not to love? Nicole Kidman and Sandra Bullock are bewitching sisters bonding over murder, mischief and most importantly margaritas along with their aunts, played by Channing and Dianne Wiest.

Get all your questions about female sexuality finally answered by Melanie Griffith’s hooker with a heart of gold, V.

We still prefer Jinkx Monsoon’s “A Little Twink” to Helena Bonham Carter’s “A Little Priest,” but this film adaptation of Sondheim’s Tony Award-winning musical horror is still a worthy watch. Johnny Depp is the titular Demon Barber of Fleet Street, once again never meeting a wig he didn’t like.

The legendary Audrey Hepburn won an Oscar for this charming classic comedy. There are few ways to spend a more delightful afternoon than streaming this story of a princess tired of her rigid schedule embarking on an adventure with an American ex-pat played by Gregory Peck.

We dare you to watch the scene above from The First Wives Club and not feel giddy. Old college pals played by Diane Keaton, Goldie Hawn and the Divine Miss M, Bette Midler reunite to mourn their friend (Stockard Channing) and seek vengeance against their lousy exes.

Matt Damon’s tiny, neon green swim trunks alone are worth queueing this up (and pausing momentarily), but the thriller also has Jude Law at peak Jude Law.

Sharon Stone plays Kim Cattrall playing Samantha Jones playing Catherine Tramell in this hilariously awful sequel. Stone is in full-tilt crazy mode, not so much oozing sexuality as much as she is plopping it all over whatever’s left of the scenery she hasn’t chewed to bits. The film was initially delayed release because Stone was upset there wasn’t enough nudity in it. She’s said she wants to direct and star in a third installment of Basic Instinct, and, bless her heart, we sure hope she does.

You should make time for anything Tina Fey and Amy Poehler do together. This isn’t their strongest outing, but it’s still a whole lot of fun.

Get ready for the upcoming release of Bridget Jones’s Baby by revisiting the first two films that made Renée Zellweger a star. The plucky rom-coms are the perfect rainy day viewing to curl up with a pint of ice cream, your best girlfriends and a bucket of cliches.

Treat yourself to the raunchy and riotous stand-up of gay icon Margaret Cho as she fires off her trademark barbs in this comedy special.

Not only is this Academy Award-winning biopic of gay cryptanalyst Alan Turing an engrossing film, but it helped raise awareness of the 49,000 gay men convicted under the same law that led to Turing’s chemical castration.