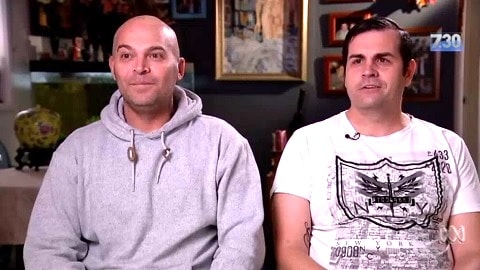 Two Australian men in a long-term relationship and opposed to same-sex marriage deny that they are homophobic.

Ben Rogers and Mark Poidevin, who met 15 years ago, say that they are committed to “traditional marriage,” concerned that “if we make one exception for one community…where does it stop?”

“We’ve been through our ups and downs like anyone else, but I love him dearly and there’s no-one else I’d like to spend my life with than him.

“I used to be a supporter of same-sex marriage. I mean, I proposed to Ben five years ago. At the time Ben said it wasn’t for him, that he didn’t believe in it, and I said, ‘When the laws change, would you like to?'”

Rogers said that he refused Poidevin’s proposal because “It’s not something I had ever envisioned.”

Poidevin, a committed Catholic, has changed his stance on same-sex marriage since he proposed to Ben five years ago.

“If we make one exception for one community, that being the same-sex couples, where does it stop?” Mark said.

Both are happy to express their views, but say their honesty has come at a cost.

“The campaign’s gotten nasty on both sides and I think the comments that I hear are, ‘You’re a homophobe if you don’t support gay marriage,'” Mark said. I’m a gay person here that’s coming out and saying, ‘well, no it’s not. It’s your right to have a view, your right to have a view either way and people should be respected’. You’re not intolerant if you don’t support a view.”

Rogers added: “If it’s yes, we’ll be like, ‘Congratulations, everyone can get married. But we personally will not be getting married.”

“We stand by our commitment to each other,” he said, “we don’t need marriage in our lives, definitely not.”

Previous Post: « ‘If We Took a Holiday’ Is a Short Film That Offers a Snarky Love Letter to Madonna and Friendship: WATCH
Next Post: ‘American Horror Story,’ ‘One Mississippi’, Ricky Martin in Vegas, and More TV This Week »