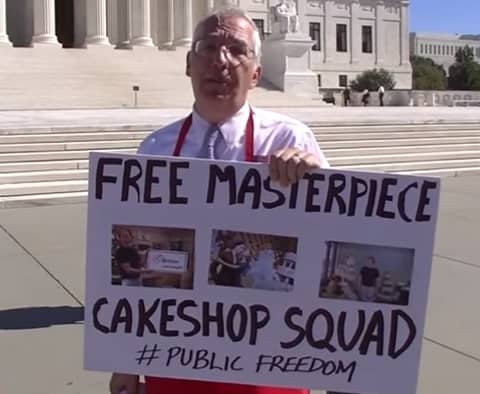 The case against Masterpiece Cakeshop – which earlier this year refused service to a gay couple – is due to be heard at the U.S. Supreme Court on December 5th.

In a move certain to influence SCOTUS judges, the Free Cake Baker Squad performed “a country parody song CAKEY BREAKY HEART to the tune of Billy Ray Cyrus’s Achy Breaky Heart, do a 2 step line dance and hold signs that say ‘Free The Cake Baker’ to promote the religious liberty of all Christians in the federal case now before the Supreme Court,” said Public Advocate President Eugene Delgaudio.

The catchy lyrics include:

You can say my work / Didn’t rock your world, / You can take your business / Someplace else,

You can tell your friends / Don’t buy a cake from him / And write and post / A bad review on Yelp.

But don’t sue my shop, / My Masterpiece Cakeshop, / ‘Cause I wouldn’t make / A wedding cake for men,

‘Cause if you sue my shop, / My Masterpiece Cakeshop, / I may never bake / Another cake again.

Have a look at the stirring rendition below.

Previous Post: « GOP Senator Bob Corker Unleashes on Trump: ‘He Debases Our Nation’ and Can’t Tell the Truth – WATCH
Next Post: Honey Company Enlists Three Gay Bears to Sell Its Product and the Result is Sticky and Sweet: WATCH »