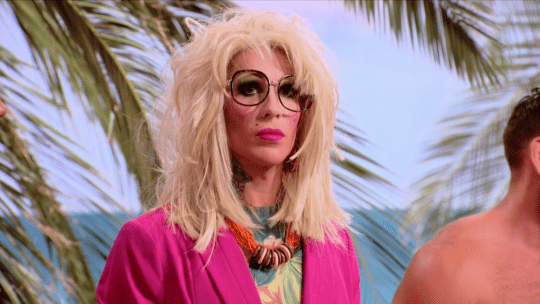 What happened to our girls? After last week’s dynamic Cher Rusical, slap-happy mini-challenge and glitterific runway, last night’s episode of RuPaul’s Drag Race felt like everyone spiked their Absolut berry acai cocktails with a hefty helping of Ambien. (Or at least Flaccida.) It was an off-week for even the strongest competitors, yielding a middling episode up until a thrilling lip sync for your life.

The episode starts strongly enough. We’re treated to a hilarious cameo appearance from late-night host (and political humor zaddy) Stephen Colbert spouting off drag lingo like a drunk, straight white girl at brunch after too many micheladas. It’s a short, but effective clip to clue the girls in that this will be another acting-focused week. 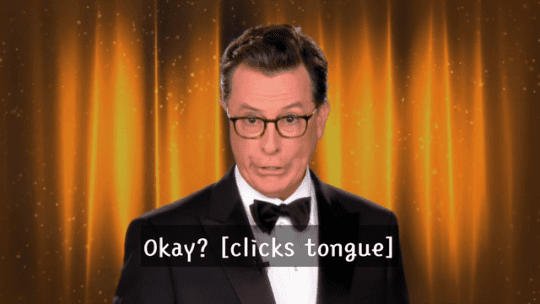 But(t) first, a min-challenge: Pants Down, Bottoms Up. It’s one of those Drag Race staples that forces the extended Pit Crew family to come in, drop trou and test the ladies’ recall ability while binging on cakes. Each queen takes turns calling out a Crew member, getting a peak at their Rounderbum (#spon) undies, then attempting to pick the other Crew member wearing the same color/style.

Aquaria manages to snag the win (though I think Asia had the best time playing), and the prize is a big one. She gets the power to cast the roles in this week’s maxi-challenge, a parody of HBO’s Westworld titled Breastworld. (You get it?! You get it.) However, she immediately whiffs the opportunity by letting the ladies pick their roles based off the description, not the script.

The result is most of the queens, Aquaria included, not being happy about having too many or too few lines in the script. Asia in particular is confused by this strategy, reminding viewers how Nicole Kidman wouldn’t just sign on to play a housewife that drives a yellow car; she’d want to see a script and wait six months. (The things you learn on this show!)

Ru’s visit to the workroom feels like a pipebomb. Every interaction seems to cut right to the heart of what’s holding each queen back, and you could see it shake a few of the gals already feeling a little insecure. She criticizes Aquaria’s decision to relinquish her advantage assigning roles for the sake of sparing people’s feelings. Ru encourages Monet to kick up the glamour a bit with bigger wigs (to balance out that bigger booty). Eureka needs to keep her momentum going by continuing to stand out. Kameron needs to be likable, which seems like the deepest read in the room. And Ru could see Cracker getting too in her own head during her performances. It’s too rehearsed. 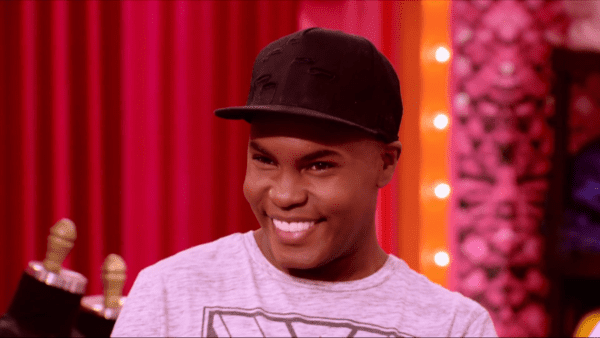 The only person that seems energized by Ru’s chat is Asia. Coming off last week’s lip sync, Ru gives her some coaching to remember who she is and turn it out. It brings out some obvious emotion in Asia. (And, since it reminds me a little bit of the emotional climax of Moana, it also sparks a lot of emotion in me.)

The filming of Breastworld is a tough watch. Monet manages to play at the top of her intelligence as a fun-loving lady trying to get her uptight friend to loosen up. She comfortably ad libs lines and seems the most at ease on set.

Aquaria delivers another surprisingly good comedic performance as a robot hostess. (Cold and emotionless seems to be her sweet spot.) But boy are a lot of the gals struggling. Kameron is tasked with playing Monet’s conservative travel companion, and her interpretation of the character is a lot of shrieking.

One might expect Kam to have a hard time in an acting challenge, but it’s tougher to understand why Eureka is having such a rough go. As the big, bawdy bingo hostess, you’d think Eureka would be a natural. But her energy is way off. She comes off exhausted, fails to sell the physical humor, and, worst of all, she can’t even nail the iconic IVYYYYYYYYYYYYYYYYY WINTERSSSSS! required. Cracker also crumbles upon the first note from Michelle and Ross.

Thank goodness Asia comes marching in as Parah Sailin, barely a caricature of the former Wasilla mayor. Instead of channelling Tina Fey as Palin, Asia brings her angry Beyoncé energy to the character, and it’s a breath of fresh air after watching so much flailing on set.

By the end of filming, even Michelle can’t hide her frustration, telling the queens, “Unless the set falls over this is our last take. I don’t want to do this anymore.”

This week’s runway theme, Silver Foxy, allows us to glimpse what these queens will look like in 50 years. The judges, including Ru’s Broad City co-stars Abbi Jacobson and Ilana Glazer, are gagged for Cracker’s ripped from the pages of Runway Magazine, Upper East Side editrix. Michelle and I are both perplexed by Asia’s aged showgirl, which is working at the very top and the very bottom, but it’s a bit of a mystery in between. Monet takes a much more straightforward interpretation with an IV and comically sagging breasts, but the judges read her for a lack of eleganza. 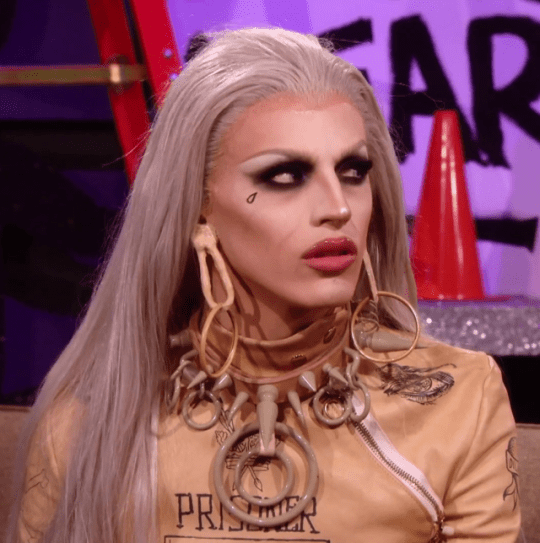 The panel is also a bit perplexed by Aquaria’s punk rock senior, inspired by Michelle Lamy, but it’s working for me! Look no further than sexy septuagenarian Debbie Harry, who is still serving lewks today.

Kam comes out swinging, launching down the runway in full facial prosthetics. She gives her funniest performance of the entire season hobbling down the runway only to turn into a dancing machine once she pops some pills. And she does it all while looking like a dead ringer for Yetta from The Nanny. It’s great.

Meanwhile, the worst look to come down the runway is shockingly on Eureka. Ross says it best: “She looked like Paula Deen dressed like a witch.” There’s none of Eureka’s usual bounce or over-the-top sparkle. There’s not even a big, gray loaf. Huge disappoint.

The actual Breastworld video plays out as expected based on what we’ve seen from filming. The only surprise is the appearance of internet darling Randy Rainbow. Asia’s strong Parah Sailin (such a good drag name) snags her the win, while Monet and Aquaria are safe. Cracker escapes the bottom two, leaving Kam and Eureka to lip sync.

They truly turn it out to Patti LaBelle’s “New Attitude.” Kam in particular delivers one of the best lip syncs this season. After a strong showing from both queens, Ru pulls the rare double-Shantay, allowing both girls to stay.

Next week: It’s makeover time! The queens will be turning “social media stars” (ugh) into fierce queens. The downside is that means Frankie Grande is involved (UGH), but the upshot is we get true superstar Lizzo on the judging panel.

We’ve only got three more episodes before the finale. (There’s no episode on May 31, and June 21 is the reunion.) Let’s see where our queens stand ahead of the final stretch in our rankings below!

1. It’s easy to pigeonhole Aquaria as merely a fashion queen, but now she’s knocked two comedy challenges right outta the park. Given her strong aesthetic sense, she’s poised to slay the makeover as well. Although her runway didn’t connect with the judges, I still think she gave the best comedic performance in Breastworld.

2. I’m glad to see Asia surging again. Perhaps her lip sync last week really did galvanize her. I was truly confused by her runway look, but she at least committed fully to the character, munching on chips as she shuffled along the mainstage. She’s a pro, and it’s looking like she may outlast a few other queens en route to the finale.

3. What happened to Eureka this week? Her performance was not up to par, and her runway was a snooze. Even the lip sync didn’t sit right with me. Her bag of tricks and cheerleader dance moves felt like they could’ve been set to any track. She didn’t seem to connect to the song the way Kameron did. I feel like her top three placement is a forgone conclusion, which is why Ru had to spare her despite, in my opinion, Kameron’s clearly superior lip sync.

4. I hate to say it, because I adore her, but Monet is not going to win this thing. When her time is up, I can’t be sure, but her comedic performances are just not strong enough to compensate for such lackluster lerks. She was fun in Breastworld, but it wasn’t exactly a stretch for her.

5. Oh, Cracker. The sharp comedy queen has been steadily slipping for weeks. There wasn’t really a joke or choice to be found in all her time on-screen in Breastworld. She had the most to do, and she did the least with it. I liked her runway, but it didn’t feel as striking as Kam or even as creative as Monet. It’s not clear what’s not clicking with Cracker, but as it stands, she’s at risk of going home before the finale.

6. Kameron really surprised me with that lip sync. Harkening back to her strong showing in the PharmaRusical, I guess it makes sense, but man! That was a fun performance! Based on the lip sync alone, I think Kameron was the clear winner. Does she have more potential to win this whole competition? Probably not. She is also so deep in her head, I worry she won’t be able to get over herself. (She was unbearable on this week’s Untucked, beating herself up to such an extent I didn’t know whether she deserved a hug or the Golden Gloves.) If you don’t believe you’re a star, no one else will either.