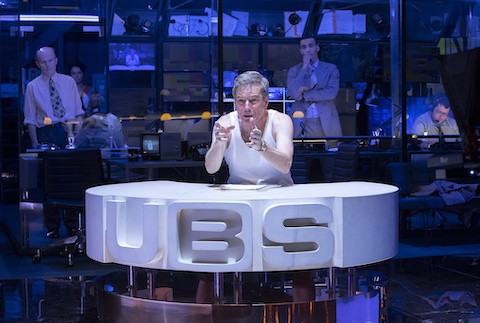 Proselytizing on the evening news has come a long way since anchorman Howard Beale went raving mad in Network. Over the near half century since the film’s 1976 release, talking heads have become a 24-hour business and anyone with a Twitter account can grab the mic and gripe.

London’s National Theatre production, which opened at the Belasco Theatre tonight, very badly wants the material to be its message — to show us how far everything has spun out of control by taking us back to where it began.

Network’s prescience is terrifying, no doubt — but just as much feels quaint, given the radical expanse of our media landscape in comparison to a time when network news was appointment television. The play’s dialogue is largely lifted straight from Paddy Chayefsky’s Oscar-winning screenplay, about an anchorman on his way out who gets a second shot at hit ratings after he loses it on air. (He’s mad as hell, and he’s not going to take it anymore, as you may recall.) 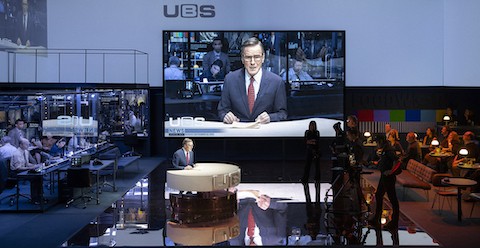 Lee Hall’s stage adaptation is littered with truisms poised to elicit knowing grumbles from the audience: “The first rule of news. You do not become the news.” “We’re not in the business of morality.” “This tube can make or break presidents, popes, and prime ministers… And woe is us if it ever falls into the wrong hands of the wrong people.”

Yes, American television gave rise to a president who manipulated its power to control people, all while promising he was an everyman instead of a celebrity. You’ve read the op-eds. 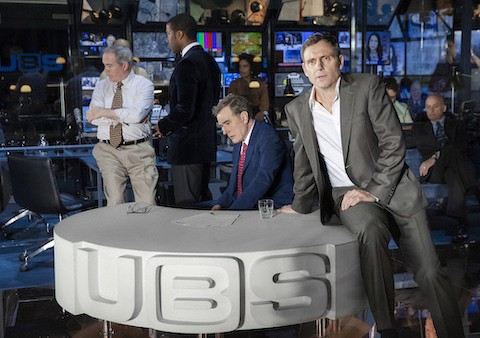 We already know that Beale’s populist anxieties — corporate interests undermining democracy, media brainwashing the people, foreign interference in American sovereignty — have become our living nightmare. What director Ivo van Hove’s slick but mostly soulless production fails to do is couch much of this in heart-pounding human drama, despite a deeply felt and characteristically robust turn from Bryan Cranston. 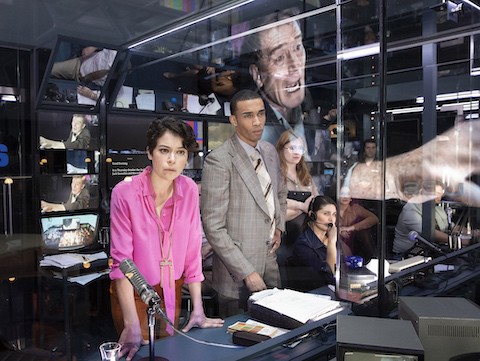 Aside from the Breaking Bad star’s visceral performance, most everything else about Van Hove’s production feels rather more hospitable to androids than human players. Its only pulse often comes from the incongruous club beats that make up the director’s customarily heavy-handed score. Television is a cool medium, and the stage is lined with them (scenic and lighting design are by Van Hove’s longtime collaborator Jan Versweyveld, video design by Tal Yarden), often playing vintage commercials on loop. The setting seems to be neither back then nor now, but some sort of stylized in between where ideas operate independently of character. 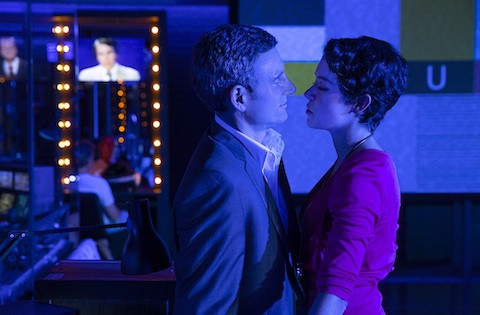 Orphan Black’s Tatiana Maslany is peculiarly staid as the alternately fiery and poised executive who turns Beale’s show into a hit and beds his veteran producer (Faye Dunaway won an Oscar for her withering performance). Tony Goldwyn fares better, but is woefully miscast as the latter grizzled producer supposedly in his winter years (anyone who thinks Goldwyn isn’t in the prime of life has none in their veins). An affair between the two, palpably flesh and blood on screen, is reduced here to a B-plot that feels extraneous rather than anchoring the story in the messy stuff of life. When his wife (Alyssa Bresnahan) rails at him for the betrayal you want to tell her how little she ought to worry.

Perhaps the biggest question looming over Network is whether a ranting white stalwart of the old guard is really a suitable avatar for our current rage against the machine. If he were, he may have needed fewer of Van Hove’s bells and whistles to capture and sustain our attention.

Recent theatre features…
Broadway’s ‘The Cher Show’ Is a Feast for Fans and an Assertion of Legacy: REVIEW
Feel-Good New Musical ‘The Prom’ Wears a Big Heart on Its Puffy Sleeve – REVIEW
Broadway’s ‘American Son’ Starring Kerry Washington Is the Most Vacuous Kind of Race Play: REVIEW
Michael Urie and Mercedes Ruehl Lead Transcendent Broadway Revival of ‘Torch Song’: REVIEW
The Legacy of Gloria Steinem Burns Bright in ‘Gloria: A Life’ Off-Broadway: REVIEW
Stockard Channing and Glenn Close Make Magic of Maternal Strife Off-Broadway: REVIEW
‘What the Constitution Means to Me’ Is the Best Political Play of the Trump Era: REVIEW