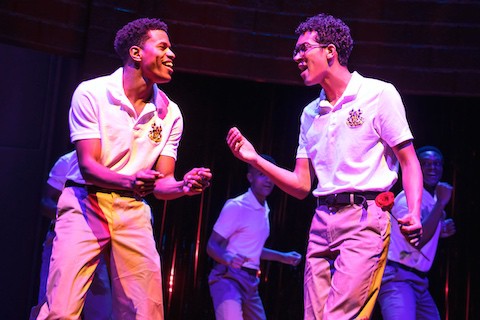 A new play above 42nd Street that allows young Black men the rich, messy humanity of any other character, rather casting them as unseen statistics or putting them on trial, is rare enough to merit celebration. Choir Boy, which opened tonight marking the Broadway debut of Moonlight screenwriter Tarell Alvin McCraney, is nothing short of a rapture.

We’re at the Charles R. Drew Prep School for Boys, a breeding ground for Black excellence where the headmaster (Tony winner Chuck Cooper) tells students “keep your minds clear and your hands in prayer.” The school’s renowned choir is singing at graduation when a taunt from inside its ranks startles the lead soloist: “This faggot ass Nigga,” scoffs Bobby (J. Quinton Johnson) at the overtly effeminate Pharus (Jeremy Pope). 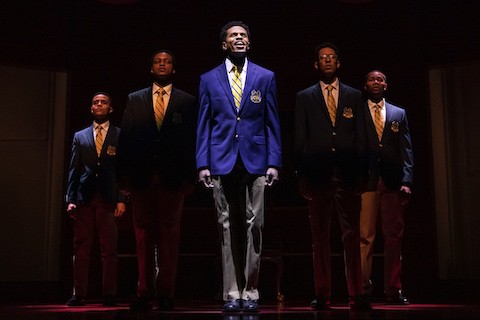 From here, McCraney unfurls an ensemble coming-of-age story that’s insightful and generous with every boy in the choir as we follow them through the next year. An all-male, all-Black boarding school offers an insular and combustible setting inside the Friedman Theatre for the play to examine how these boys become men. In their intimately observed stories, and through soulful, rousing music interludes, McCraney illustrates the specific cultural forces that shape the conventions of Black masculinity — and the struggles of navigating around them.

Pharus is no shrinking violet in the face of bullying or any other context; his eloquence and sass are the source of much of the play’s vigorous humor. He’s the smartest, most talented kid in the room most of the time, and he knows what he deserves. It’s a refreshing characterization for a queer character in his shoes, and an impossibly winning one in Pope’s hands. “Would you rather be feared or respected, Headmaster?” he asks in their meeting after the incident, articulating the fork in the road as he sees it. 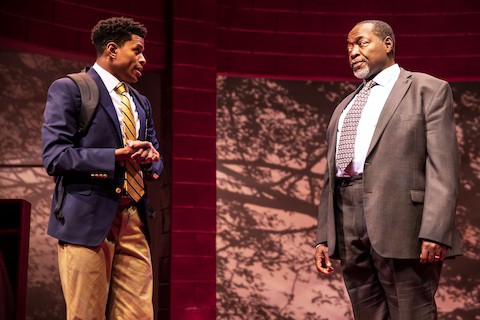 Bobby’s hatefulness isn’t excused, but placed in the context of a character whose callousness masks vulnerability. His frustration at being policed for picking on Pharus stems from knowing he has a whole life of being policed ahead of him. “My daddy say they used to let you get away with a lil bit because they know how hard it is to be a black man out there,” Bobby says. “Now, everything got to be watched, gotta be careful, gotta be cordial.” His shirking of respectability politics is easy enough to understand. 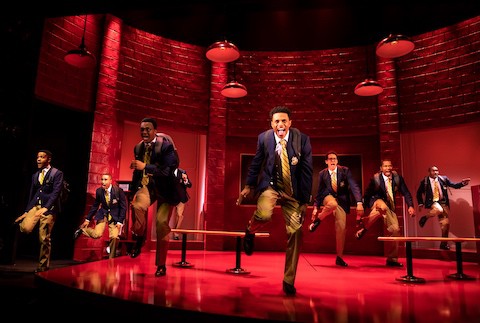 That the two boys actually mirror each other in their essential desire to be who they are without compromise or consequence is one mark of the play’s formal brilliance. Another is its embrace of familiar conventions of school-day drama that may have bordered on cliche in less skilled hands, like PAs from the headmaster between scenes, and a rumpled white teacher (Austin Pendleton) who gets thrown in to discipline and inspire, stirring echoes of Dangerous Minds and Dead Poets Society. 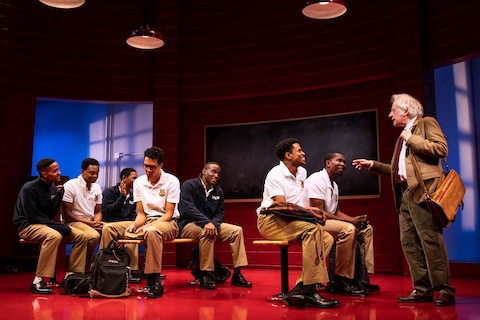 Mostly, it’s just a pleasure to spend time at Drew, getting to know the school’s inhabitants as they get to know themselves (it struck me several times that Choir Boy has all the ingredients for an addicting serial drama). Manhattan Theatre Club’s production, directed by Trip Cullman and first staged off-Broadway in 2013, generates momentum and affection in equal measure, such that semesters fly by and suddenly it’s lights up and time for real life. Fortunately, we live in one where a play like Choir Boy is on Broadway.

Recent theatre features…
Towleroad’s Top 10 Plays and Musicals of 2018
The Most Interesting Part of Broadway’s ‘To Kill a Mockingbird’ Already Happened Off Stage: REVIEW
‘Clueless, the Musical’ Can’t Capture the Movie’s Bite Off-Broadway: REVIEW
Bryan Cranston Headlines a Bold but Bloodless ‘Network’ on Broadway: REVIEW
Broadway’s ‘The Cher Show’ Is a Feast for Fans and an Assertion of Legacy: REVIEW
Feel-Good New Musical ‘The Prom’ Wears a Big Heart on Its Puffy Sleeve – REVIEW
Broadway’s ‘American Son’ Starring Kerry Washington Is the Most Vacuous Kind of Race Play: REVIEW