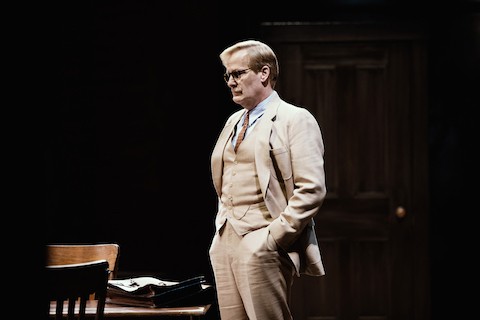 The real-life courtroom drama that marked To Kill a Mockingbird’s hotly contested journey to the stage was always in danger of out-performing the play itself. Harper Lee’s estate sued over the adaptation before rehearsals even began. Power producer Scott Rudin doubled down on Aaron Sorkin’s right to Sorkin by counter-suing the estate. A draft of the play was nearly performed in front of a judge, using the court as its stage (!).

If only anything about the production that opened on Broadway tonight were nearly as thrilling.

But the trail unfolding at the Shubert Theatre — of Tom Robinson (Gbenga Akinnagbe), a Black man accused of raping a white woman in Jim Crow Alabama —  feels unusually dull, and more like a trial of patience. A man’s life is at stake, but there is no question of suspense. Perhaps it’s because we know so well how the story goes, not just from reading Lee’s novel, but from experiencing or living with the injustices Black people face every day. 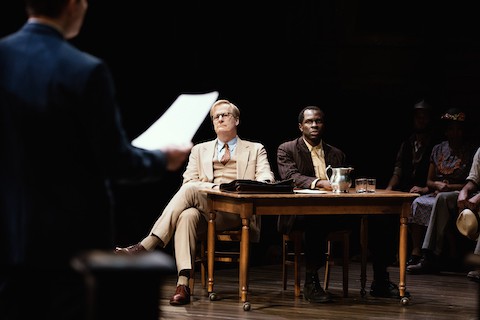 What is the point of rehearsing such trauma on stage, even in the form of a towering literary adaptation, except to congratulate ourselves for having witnessed Something Important in the comfort of the dark?

Or maybe this trial feels boring because there’s no question here of who is right or wrong. Even if such ambiguity were possible reading Lee’s narrative today, the production makes certain we know good from evil with the subtlety of an axe splitting wood. As the victim’s father (and likely rapist), Frederick Weller is a backwoods bigot with the carriage of Yosemite Sam. Robinson, and the Finch family maid Calpurnia (played by LaTanya Richardson Jackson) are thankless Black characters tasked with representing the worthiness of an entire race. 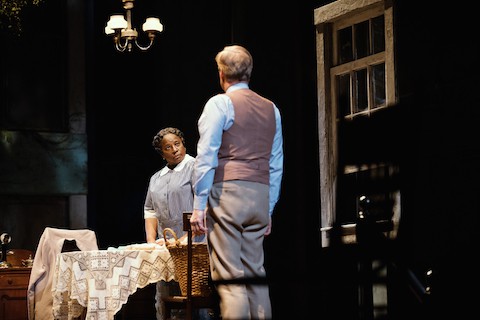 And then, of course, there’s Atticus. It is the fate of his legacy, fueled by the production’s legal battle over his characterization, that’s really on trial here. Would he be the paragon of moral responsibility so fondly remembered from the novel, and from Gregory Peck’s performance on film? A closeted bigot himself, as revealed in Go Set a Watchman, released under ambiguous circumstances shortly before Lee’s death?

Jeff Daniels’ Atticus reads rather more smug than wise, a white savior with a chip on his shoulder and a Black maid at home. When he claims to his kids that he never looks down on anyone, it’s like a Sorkin punchline that lands with a deadening thud. Whether we’re meant to interrogate the character’s moral standing or simply fall for Daniels’ signature self-satisfaction, his Atticus doesn’t make for insightful or agreeable company. 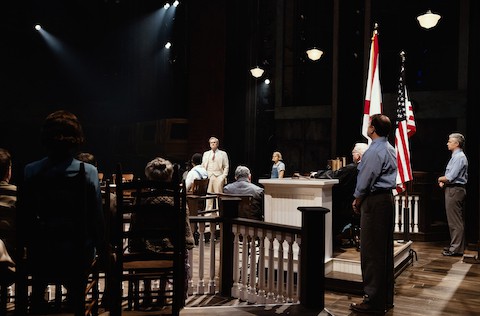 Not that his progeny have very far to look up to him; in director Bartlett Sher’s production, narrators Scout (Celia Keenan-Bolger), Jem (Will Pullen), and their summer sidekick Dill (Gideon Glick) are all played by adult actors. Given that the story lives in the space between innocence and ugly truths, it’s a choice that hobbles the drama from the outset. Overalls and free-wheeling limbs only go so far. (For the dramatic potential of employing actual adolescents in a play about family, justice, and the soul of a nation — look across town at The Ferryman.)

One area of concession Lee’s estate reportedly made to Sorkin was the addition of dialogue for the play’s Black characters. It’s hardly enough to notice. Upon exiting through Miriam Beuther’s framework set, Jackson’s Calpurnia can often be seen banging a fist into her hand, shaking her head either in resignation or disgust. It’s easy to why — and to wish we could hear her story instead.

Previous Post: « Trump Blasts Michael Cohen for Cutting a Deal with Prosecutors ‘in Order to Embarrass Me’ – WATCH
Next Post: Michael Cohen Unloads, Says Trump is Lying About Russia, and Mueller Has ‘Substantial Info’ to Corroborate Him: WATCH »