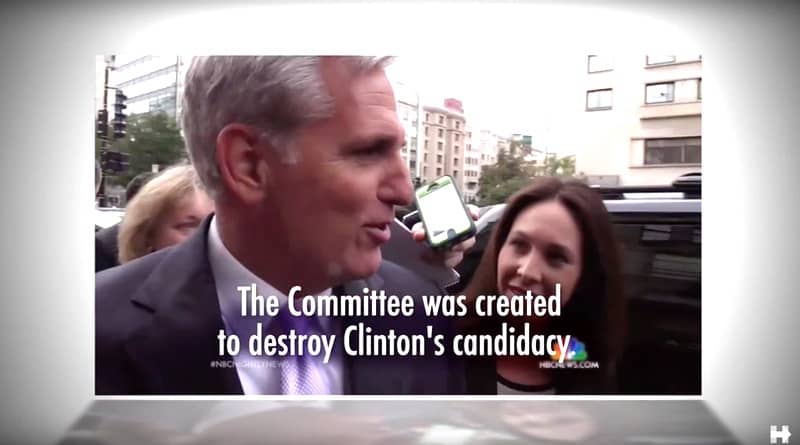 Hillary Clinton’s campaign begins running a national ad on Tuesday that highlights statements from House Speaker hopeful Kevin McCarthy which revealed that the Benghazi select committee was set up to politically destroy her.

Says the ad: “The Republicans finally admit it.”

Clinton uses McCarthy’s sound byte in the new ad, which adds: “Republicans have spent millions attacking Hillary, because she is fighting for everything they oppose, from affordable healthcare to equal pay, she’ll never stop fighting for you, and the Republicans know it.”

Clinton herself jumped on the remarks in a TODAY show interview on Monday, saying:

“This committee was set up, as they have admitted, for the purpose of making a partisan, political issue out of the deaths of four Americans. I would have never done that! And if I were president — and there were Republicans or Democrats who were thinking about that — I would have done everything to shut it down.”

While Clinton’s team has been eyeing the Democratic debate on Oct. 13 as a big moment, it has also been focused on her Oct. 22 Capitol Hill testimony in front of the committee as an opportunity to move past the controversy.

The ad suggests that Clinton’s team will keep pushing McCarthy’s message leading up to the testimony as a way of combating the panel’s Republicans. And it demonstrates that the team will likely take an aggressive stance heading into the middle of the month.

Previous Post: « The AP Finally Points Out That Mat Staver’s Liberty Counsel is a Designated Hate Group
Next Post: Gay Man Who Met with the Pope Tells Lawrence O’Donnell That Kim Davis Meeting Was a ‘Set Up’: WATCH »