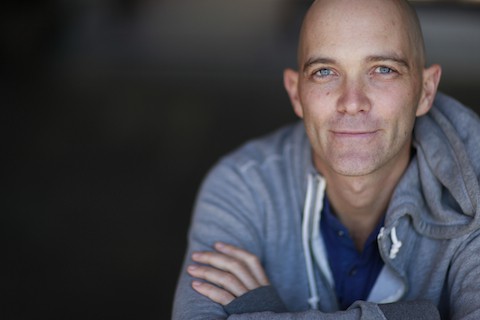 Taylor Mac’s new play is a mess — literally. When the curtain rises on Hir, which opened Off-Broadway at Playwrights Horizons on November 8, it reveals the sort of domestic disarray that would likely give Martha Stewart a stroke. Someone in this house has had a stroke, as it turns out: the father sitting dumbly in the corner, wearing a women’s nightgown, clown makeup, and a rainbow-colored wig. That opening image should give you some idea of what to expect from Mac’s work.

A prolific playwright and performance artist, Mac makes a mission of pushing boundaries and breaking apart the norm, compelling viewers to examine the pieces. Hir is titled after the preferred personal pronoun of its transgender character named Max (played by trans actor Tom Phelan of ABC Family’s The Fosters). Max lives with his mother Paige (Kristine Nielsen, a master of the heartfelt absurd) and his formerly abusive father, now more or less an invalid. 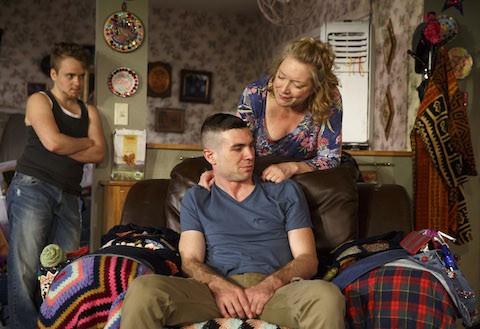 Enter Isaac (Cameron Scoggins), Max’s older brother, just returning from war in the Middle East and battling a bit of PTSD. Though Isaac is horrified to find the order in his home upended, he discovers his mother adamantly prefers things this way. He soon finds himself engaged in another kind of battle, one over the very meaning of home and the restrictions it places on how individuals define and express themselves.

I spoke to Mac about some of the play’s themes, whether cisgender actors should ever be allowed to play trans characters, and Mac’s own preferred gender pronoun, judy.

Naveen Kumar: Can you tell me a bit about what inspired the writing of this play?

Taylor Mac: When I write something, I tend say, “What is the one thing about myself that I don’t want the audience to know?” and, “What am I ignoring in my life, or the culture at large?” I actually did use both of those techniques in order to write the play, not in a literal way, but delving into issues about trying to make home a better place or leaving it when something is broken and abusive. Do you just leave it and let it be on its own, and go off into the world? What kind of responsibility do you have toward an old world that isn’t able to come along with you? Those were some of the questions that I wanted to ask with this play. 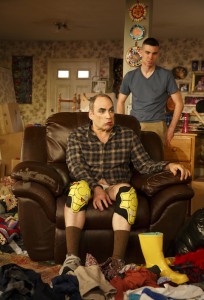 NK: I thought it was interesting that the cisgender men in the play desire domestic order — I have the particular image of Isaac, the young marine veteran, wearing dish gloves — while the family’s mother felt that disarray was some form of rebellion. Can you talk about that play on gender expectations?

TM: Even more than rebellion, she’s looking for a sort of radical healing. She talks about moving into a new world, and everything they’re doing, they’re doing so they can move on. In terms of gender expression, I think she’s using her transgender child as a way to motivate that radical healing and to find her and the family’s way into it. I wouldn’t necessarily say that gender transitioning is the key to our radical healing (laughs). But certainly, embracing new things and new world structures, and embracing who we are and refusing to let culture or society oppress you. That’s often accomplished by transgender people in coming out, and by taking the steps to transition.

The play is not about gender, it’s not about transgender people. But I am using transgender rights and issues, and transitioning as a metaphor for many of the things that are encroaching on the old world right now — many of the issues that a more conservative, hardline, nostalgia, father-knows-best ideology in our country is holding onto, the things they’re fighting against.

NK: People still often think of women as taking charge of order in the home, and here it’s the opposite, where the men want things clean. Something about the house being in order is very patriarchal.

TM: Postmodern is often very messy; it’s about tearing up the pieces and throwing them on the ground, and then saying, “Here’s the debris.” That’s very postmodern. So yes, I think we often associate order and cleanliness of the home with the mother, and [the disarray] is certainly her way of saying, “No, no, no, in order to radically heal, I’m going to expose the dysfunction of this family, so that you can see it.” It’s going to look like how it feels. So that’s what she’s doing, refusing to let anybody hide.

NK: There’s quite a funny a line when Kristine Nielsen’s character says that we’re all trans descendants of fish, or something along those lines. Her and Max’s progressive views often reach that over the top level. Was that about satirizing those more extreme radical views?

TM: I guess it’s partially satire, but I actually do believe that! (laughs) There is this part of me that believes we all live on the planet Earth and we’re all made up of the material that is circling within our contained environment. So, we’re all part of everything — it’s not too profound a thought, you know? (laughs) But it’s funny how we get so far away from basic common-sense theory about life and how it’s made. People are so intent on the polarization and compartmentalizing of communities and people and ideas — yet, we’re all here. Not here, but here. 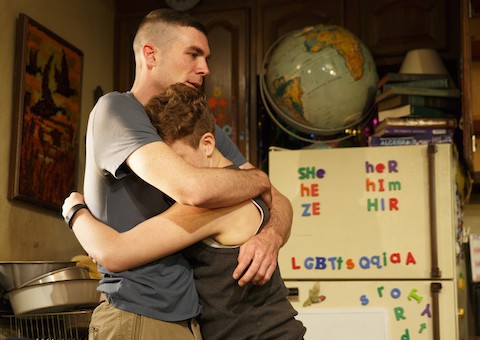 NK: Was it important to you to cast a transgender actor in the role of Max?

TM: Yes, absolutely. It was essential; I won’t let [the play] be done without a transgender actor — which may mean that it doesn’t get done as much around the country. But I just feel that it would be immoral. And I also feel like you wouldn’t understand the play. To see a transgender actor on the stage [provides] a certain amount of duality that brings with it profundity, whereas if it were a woman playing a transgender character, you miss the duality of the actor and the character existing at the same time.

TM: Oh, I find it appalling. I just think it’s wrong. I think maybe in 100 years, it’d be great, it’d be amazing, maybe. Maybe. I think people who champion the idea that actors can play any role, I understand that point of view — but it’s not my taste. I like to be able to see both the actor and the character on the stage, and see how they’re finding each other. If we had done this play 10, 15 years ago and Hilary Swank played the character, you’re missing the actual story of a transgender person and what that transgender person has gone through. Instead, you’re seeing an actress playing the transgender person, and no matter how good she is, she is still not that person. So, you’re not seeing the reality and the fiction at the same time, you’re just seeing the attempt.

And then I think it’s immoral when people don’t have opportunities, to take the few opportunities that they do have.

People are so stressed out about gender pronouns — even I am, and I’m always like, “I gotta get it right, you gotta get it right! You want to respect people, you don’t want to fail them!” — and all that stuff. I just wanted one that would bring people joy when they said it, instead of frustration. It would bring them a certain discomfort, but a pleasing discomfort. So, that’s primarily why I chose it. But also because I perform a lot in come kind of gender confluence, and people would always say “he” when they talk about me, or they would say “she,” and neither one of those felt right. So I felt like I needed to help people along, so they could understand what I’m doing outside of any kind of binary system.

NK: Do your friends use it in everyday conversation?

TM: My lover doesn’t use it! (laughs) You know, some people use it, some people don’t. My friend Dave End, who’s transgender, said, “You know you have the right pronoun, and that it’s right for you when people say it, it fills you with joy.” And I will say, when people use it, it really makes me happy! (laughs) I feel seen! You know, but I’m not a stickler, the reason that my lover doesn’t use it is because I’m not forcing him to. So I let people off, because ultimately I think, it gets you what it gets you. It can only work for people who want to embrace it, and if they don’t want to embrace it, then it’s just an obstacle in communicating.

I just let people decide what they’re game to do and what they’re not — and it tells me more about them than it does about me. So that’s kind of fun, too — to be able to tell what kind of person they are pretty early on. It doesn’t mean they’re bad! (laughs) It just means they’re a little closed off in many ways. Or that they’re focused on something else, that they’re trying to make a point and every time they have to say “judy” it makes them think of gender pronouns instead of the conversation we were having, like the war on terror or something. So I get it, I just let it go.

Hir is in performances at Playwrights Horizon’s Peter Jay Sharp Theatre through December 20.

Previous Post: « Gus Kenworthy Talks Sex, Shirtlessness, Sochi and When He Knew He Was Gay
Next Post: Kim Davis Makes Jennifer Lawrence ‘Embarrassed to Be From Kentucky’ »