In its first official pronouncement on the topic since 2005, the Vatican reiterates its declaration that gay men should not be priests, the Washington Post reports:

People who have “deep-seated homosexual tendencies” or who “support the so-called ‘gay culture’” cannot be priests in the Catholic church, the Vatican said in a new document on the priesthood.

The document, called, The Gift of the Priestly Vocation, mentions homosexuality near its conclusion:

The Church, while profoundly respecting the persons in question, cannot admit to the seminary or to holy orders those who practice homosexuality, present deep-seated homosexual tendencies or support the so-called ‘gay culture.’ Such persons, in fact, find themselves in a situation that gravely hinders them from relating correctly to men and women. One must in no way overlook the negative consequences that can derive from the ordination of persons with deep-seated homosexual tendencies.

While that paragraph might seem to lay people to be a very clear ban on gay men from becoming priests, some experts said Wednesday that in fact it leaves large loopholes for many gay men to enter seminaries.

It comes down to the definition of “deep-seated” tendencies. While some might say that one’s sexuality is a deep-seated part of a person, so any man attracted to men is ineligible for the priesthood, others find wiggle room in that language. A man who is gay but who believes the church’s teaching against gay sex and who can commit to a life of celibacy — just as straight priests do — does not have “deep-seated homosexual tendencies,” in the view of some bishops.

But many see the paper as part of a predictable pattern in Pope Francis’s papacy: “The pope’s words, often in extemporaneous remarks, lead liberals to hope that church policies will change. Then the Vatican reaffirms its traditional positions.”

In January, Cardinal Oscar Maradiaga, the Archbishop of Tegucigalpa, Honduras, told the Honduran newspaper El Heraldo that a long-rumored “gay lobby” does indeed exist within the Vatican and Pope Francis is attempting to “purify” it. 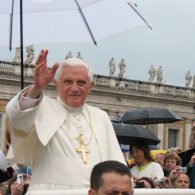 The Vatican denied those reports in a statement that was described as “unusual” at the time:

“It is deplorable that as we draw closer to the time of the beginning of the conclave … that there be a widespread distribution of often unverified, unverifiable or completely false news stories that cause serious damage to persons and institutions.”

In June of 2013, newly-anointed Pope Francis was said to have addressed the existence of a gay lobby in a private meeting with with CLAR (the Latin American and Caribbean Confederation of Religious Men and Women).

“In the Curia, there are truly some saints, but there is also a current of corruption,” he was quoted as saying. “There is talk of a ‘gay lobby’ and it’s true, it exists. We have to see what can be done.”

A month later he denied its existence at the same time he made his famous “who am I to judge” remarks about gays:

“So much is written about the gay lobby. I have yet to find anyone who can give me a Vatican identity card with ‘gay’ [written on it]. They say they are there,” the Pope said.

He said that all lobbies are bad and “the gravest problem for me.” Citing the Catechism’s teaching against marginalizing homosexual persons, he said, “If a person is gay and seeks the Lord and has good will, well who am I to judge them?” 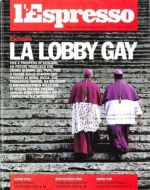 A week later, the Italian magazine L’Espresso published an article linking prelate Battista Ricca, who had recently been appointed by the Pope to a vital position with the Vatican bank, to the “gay lobby”. The article reported that Ricca had been involved in numerous relationships with gay men including a Swiss army captain and a young man who some speculated to be a male prostitute.

The magazine reported that the Vatican had no idea of Ricca’s past before his appointment by Francis and that there was an internal bid to protect him and cover it up.

A Vatican spokesperson denied Ricca was a member of the “gay lobby” and called the L’Espresso piece “not credible.”

In January 2014, a former member of the Swiss Guard, which provides the Pope’s security, said he was solicited for sex more than 20 times during his service at the Vatican by cardinals, bishops, priests and other members of the so-called ‘gay lobby’.

The former guard recalled being called in the middle of the night by a senior official who invited him into his room. In another case, he found a bottle of whiskey in his room with a visiting card left by a bishop. A priest, he said, invited him to dinner, saying that the guard would serve afterwards as dessert. He also claimed that a high official fondled him.

The ex-guard said that he reported the cases to his superiors, complaining of harassment, but received no support for his allegations.

The Vatican dismissed the claims, calling them “not credible”.

Shortly thereafter, Archbishop Angelo Becciu, No. 2 in the Vatican’s secretariat of state, urged the guard, Elmar Maeder, to provide names to back his accusations in an interview with Italian paper La Repubblica.

In recent months, Krzysztof Charamsa, the Catholic priest who made international headlines last October after he came out as gay and was subsequently relieved of his position by Pope Francis, told reporters that although me met “isolated” homosexual priests like himself, he had no knowledge of an organized “gay lobby” within the Vatican.

Previous Post: « Megan Mullally on the ‘Completely Made-Up World Where ‘Will & Grace’ is Coming Back for 10 Episodes’
Next Post: Russell Tovey Persuades Teammate to Strip Down in Flirty Clip from Gay Footballer Film ‘The Pass’ – WATCH »