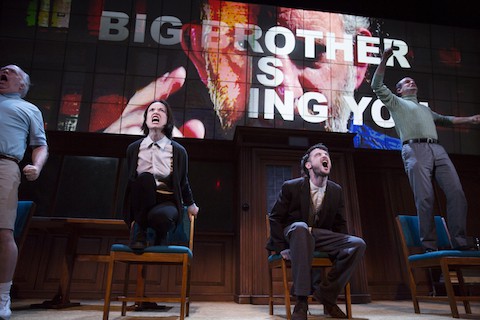 Audience members are reportedly puking and fainting at the Hudson Theatre, where a stage adaptation of 1984 opened June 22.

It’s true that watching a protagonist for the resistance get brutally maimed by the state is not for the faint at heart. But those prix fixe lunches are more likely being lost from sensory overload — blinding lights, ear-splitting noise, and copious stage blood — than from the bracing relevance of George Orwell’s dystopian narrative, which is not rendered all that clearly here. 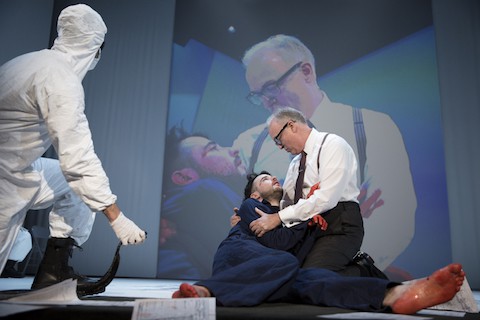 As adapted and directed for the stage by Robert Icke and Duncan MacMillan, Orwell’s story is cast in bold, theatrical strokes. The time, at least, is clear; the place and individual locales are less so in Chloe Lamford’s static scenic design, a characterless, wood-paneled room that transforms, as the production comes to a head, with a satisfying flourish. 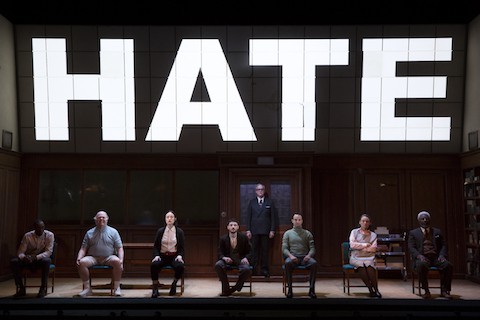 We know, at least, that we’re in a totalitarian state (Oceania, formerly Britain) and that “Big Brother” is watching. Any hint of dissent, or “thought crime,” will be monitored and punished. If you’ve read the book since its recent surge in popularity, or skimmed a synopsis in high school, you likely know all of this. That much, at least, Ickly and MacMillan are counting on, given their focus on the central romance over establishing a clearly detailed context for it. 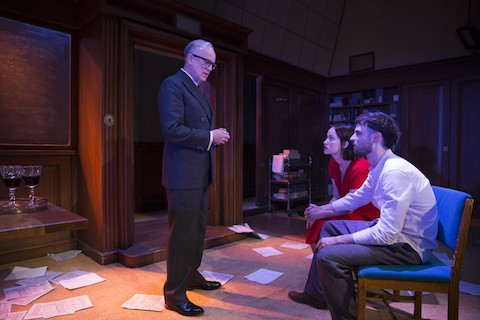 With a love-in-a-hopeless-place plot as the story’s engine, it’s unfortunate that sparks don’t exactly fly between co-stars Tom Sturridge and Olivia Wilde. As Winston Smith, Sturridge is listless, more like an emo singer-songwriter than an undercover revolutionary. And though Wilde brings a vigorous energy to her Broadway debut, their tepid affair gives off little steam. As their double-crossing antagonist, it’s Reed Birney who commands the show, just as he does the lovers’ fate.

The world has changed since this production first premiered in London in 2014. Orwell’s 1949 novel catapulted onto the bestsellers list following Kellyanne Conway’s assertion of “alternative facts,” a phrase lifted right from its pages. A government ruled by the cult of personality that’s rewriting the past, curbing dissent, collecting surveillance — it’s all enough to make you nauseous. But you don’t need to sit in the dark with your phone off to know that.

Recent theatre features…
Bette Midler Cannot Be Played Off and 6 Other Truths From the 2017 Tony Awards
Matthew Perry Is the Drunk Who Gets the Girl in ‘The End of Longing’ Off-Broadway: REVIEW
Michael Urie Will Keep You Laughing About Russia in ‘The Government Inspector’ Off-Broadway: REVIEW
Bette Midler Is Back on Broadway in ‘Hello, Dolly!’ and You Probably Can’t Handle It: REVIEW
Cynthia Nixon and Laura Linney Tear It Up in Handsome Revival of ‘The Little Foxes’: REVIEW
A Kiss Between Women Ignites Scandal in Stunning New Play ‘Indecent’: REVIEW