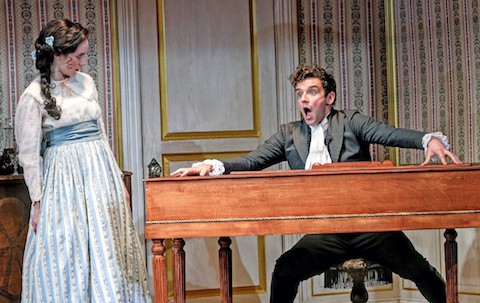 The last time we saw Michael Urie off-Broadway, he was trapped in Barbra Streisand’s basement. (How innocent we were then!) Now, like the dignity of most White House advisors, he’s in Russia — where his boozy lothario is mistaken for the title character in The Government Inspector, which opened off-Broadway last night at the Duke Theatre.

Like many alternately hilarious and terrifying works of art, Nikolai Gogol’s 1836 satire, adapted here by Jeffrey Hatcher, has assumed a new kind of relevance. As Hatcher writes in his program note for the Red Bull Theater production, it’s easy to see why without too much winking at modern audiences. Which is a relief. Because scary as it is to see over-the-top caricatures of corrupt officials mirror IRL D.C., it’s damn fun to escape over a century into the past to provincial Russia, throw your head back, and laugh it out. 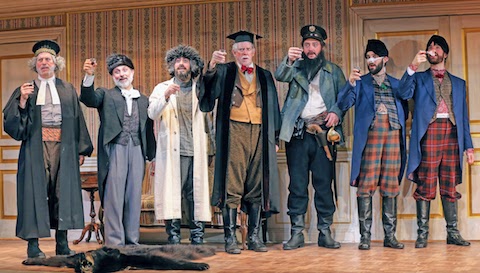 When we first meet Urie’s Hlestakov, he’s got a gun to his head — but he can’t stop fixing his hair in the mirror long enough to pull the trigger. He’s a lowly civil employee and man of pleasure just passing through — the suicide attempt is due to running up his tab at the local inn; his servant Ossip (Arnie Burton, excellent in nimble double roles) assures us it’s a daily occurrence. When the mayor mistakes him for a higher-up come to inspect the town, Hlestakov readily accepts the bribes thrown his way and an invitation to stay at the mayor’s house. 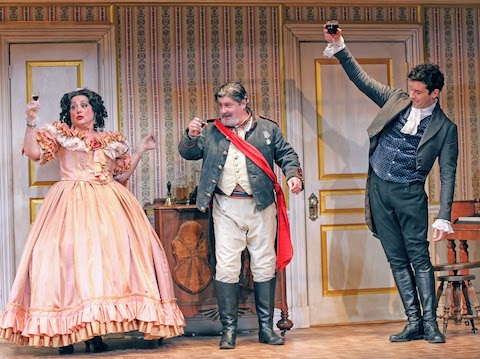 Once Hlestakov grows hip to the windfall of his mistaken identity, he milks it to his every advantage. Urie delivers his signature charm attack on a bumbling gaggle of local officials, and it’s just the balm this summer theatre season calls for. As promotional materials featuring a wide-eyed and open-mouthed Urie suggest, this is the production’s main draw, and certainly one of its biggest strengths. The actor’s fluid way with physical gags and innate goofiness are perfectly suited to the part and a delight to watch.

In the ensuing love triangle between the mayor’s wife, Anna, played by a scene-stealing Mary Testa, and their daughter Marya (Talene Monahon), Urie’s spritely sexual energy also keeps the story more funny and less creepy than it might otherwise be. 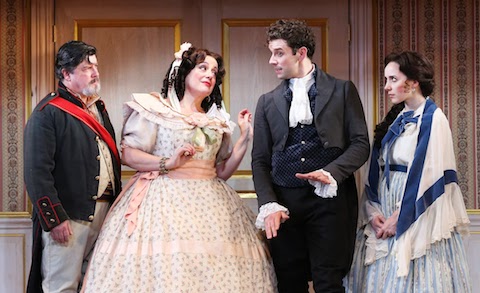 Director Jesse Berger’s production unfolds on a two-tier comic-strip set (by Alexis Distler), which visualizes the upstairs-downstairs dynamics between the classes. It’s a clever use of the small space, and the compact design’s slightly claustrophobic feel is likely intentional. We may be in the sprawl of the countryside, but there’s still no escape. 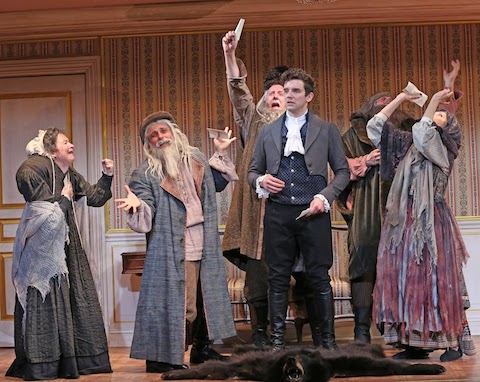 Amidst all the slapstick antics, stuffing of pockets, and flagrant acts of wooing, one scene cuts too close not to incite a shiver of recognition. Angry peasants besieging the mayor’s house eventually burst in and plead with Hlestakov (whom they have no idea is a greedy, lecherous fraud) to save them from their crooked mayor. Their lives are being run into the ground and they’re desperate for help.

The man they peg their hopes on smiles and takes their money, promising help he has no intention of delivering. It’s a good thing Urie keeps us laughing; sometimes it’s the only thing left to do.

Recent theatre features…
A Queer Conman Disrupts Social Boundaries in Tame Revival of ‘Six Degrees of Separation’ – REVIEW
‘Anastasia’ the Musical Might Just Make a Princess Out of You Yet: REVIEW
Broadway’s ‘Charlie and the Chocolate Factory’ Musical Is Safe for Diabetics: REVIEW
Bette Midler Is Back on Broadway in ‘Hello, Dolly!’ and You Probably Can’t Handle It: REVIEW
Cynthia Nixon and Laura Linney Tear It Up in Handsome Revival of ‘The Little Foxes’: REVIEW
A Kiss Between Women Ignites Scandal in Stunning New Play ‘Indecent’: REVIEW