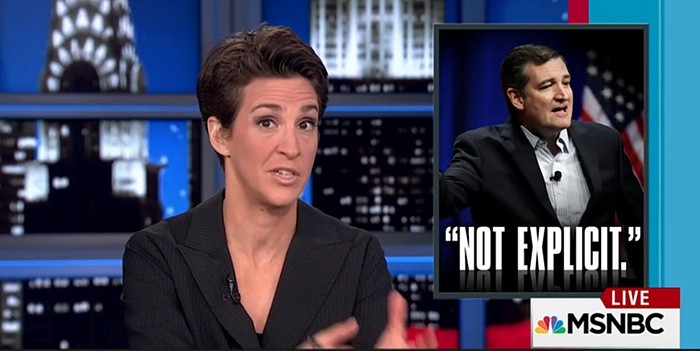 Rachel Maddow delivered a necessary grilling to Ted Cruz’s campaign this week about Cruz’s appearance at Kevin Swanson’s “kill the gays” GOP presidential forum, asking the campaign to explain to justify sharing the stage with someone with those beliefs.

Maddow begins the segment with a bit about Uganda and that country’s gay community’s pleas to Pope Francis to preach about tolerance during his visit there this week. She then links anti-gay sentiment in Uganda to the American Christian evangelists who brought their anti-gay hate to that country, including the likes of Swanson.

MUST-WATCH: ‘Kill the Gays’ Pastor Says ‘We Are Messed Up’, Proves It with Epic Meltdown: WATCH

Attending Swanson’s rally, of course, were also Bobby Jindal, and Mike Huckabee, whom Maddow says folks should care less about because Jindal has dropped out of the 2016 campaign and Huckabee just isn’t relevant.

Cruz, however, is polling close to Donald Trump in some areas, and Maddow says he needs to answer some questions about his attendance at this rally.

In the quest for a response from Cruz’s campaign Maddow’s producers sent Cruz spokesman Rick Tyler a tape of Swanson’s “kill the gays” rant after Tyler told them, “Send me a video or audio where he explicitly says this and I will look at it.”

The campaign responded with two words: “Not explicit.”

Swanson was apparently not explicit enough in his discussion of why homosexuals deserve to die for the Cruz campaign to offer a response.