Donald Trump apparently has a Women for Trump’ bus tour and it made a stop at Orlando’s Pulse nightclub last week, the site of the deadliest anti-LGBT attack in U.S. history.

Honored to pay tribute to the victims of the #PulseNightclub & sign the names of friends who care too. 🌈 #LoveWins pic.twitter.com/9IFtYxKDoy

Via The Washington Times:

They laid a wreath and bouquets of flowers at the makeshift memorial. They also wrote messages on the canvas-covered fence surrounding the building that is covered with handwritten remembrances for the victims and pleas for peace.

After the women left, a message written on a large hart-shaped drawing on the canvas read: “You will forever be in our hearts, love from NYC.” 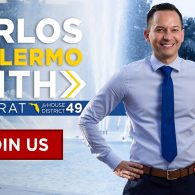 “I just hope there is a lot of reflection in the Trump campaign about their response to this tragedy. The Trump campaign in its entirety is a campaign based on hate, racism and bigotry…His call to action immediately after the shooting that LGBT Floridians needed to turn against our Muslim brothers and sisters, and join him — it’s hate mongering and fear mongering, and he should be ashamed of himself.”

The visit from ‘Women for Trump’ came just days before Hillary Clinton herself campaigned at a gay club in Wilton Manors, Florida, telling the crowd, “Make no mistake: LGBT rights are at stake” in this election. Clinton also sharply denounced anti-gay conversion therapy.

Clinton visited Pulse in July, a little over a month after the horrific attack.

Trump, the self-proclaimed ‘true friend’ to the LGBT community, still has not visited Pulse. Though he did respond in disgusting fashion to news of the attack only hours after it happened.

Trump also attended an anti-LGBT hate conference just miles from the Pulse massacre that began on the two month anniversary of the attack and set up a campaign office across the street from Pulse.

Trump’s campaign shows no sign of backing down from its attempt to paint itself as pro-LGBT despite Trump’s horrible record on LGBT rights, including his coziness with the anti-LGBT right, his choosing anti-LGBT political operatives to run his campaign, his presiding over the most anti-LGBT platform in the Grand Old Party’s history, his support for the vilest ‘religious freedom’ bill of our time, and his desire to appoint anti-LGBT justices to the Supreme Court.

So a note to ‘Women for Trump’, Trump himself, and Republicans courting the LGBT vote: being a friend to the LGBT community is more than a photo-op. If you want to be counted as a friend to the LGBT community, you have to do more than lay some flowers and sign a nice message, or in Donald’s case, send your surrogates to do so. For starters, maybe try to avoid inciting hatred, currying favor with anti-LGBT bigots, and backing draconian anti-LGBT policies.