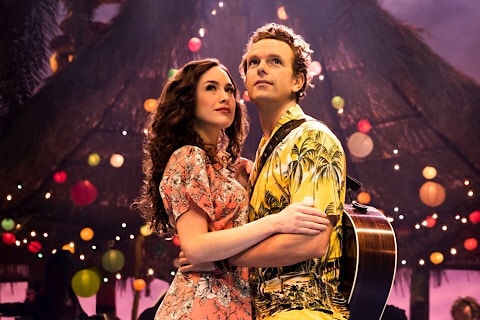 Rachel, an ambitious career scientist, is ordering a drink at 10 a.m. She’s just spent a few rum-soaked nights in the sinewy arms of Tully, a Zenned-out singer-songwriter who’s never out of flip-flops. It happens to lady tourists every week down at the ramshackle resort in Escape to Margaritaville, a doggedly faithful brand extension from beach bum turned lifestyle mogul Jimmy Buffett that hiccuped open on Broadway last night.

Now, before you decide whether to book a stay at Margaritaville™ (never mind which island, does it matter?), you should probably grab some trademarked tequila. Then, at least, you might try to imagine there’s some sizzle inside the Marriott Marquis, or get buzzed enough to briefly forget that you can see exactly where all this is going from the first welcome drink. (The sit-comy book is by Greg Garcia and Mike O’Malley, former scribes on My Name Is Earl and Shameless, respectively.) 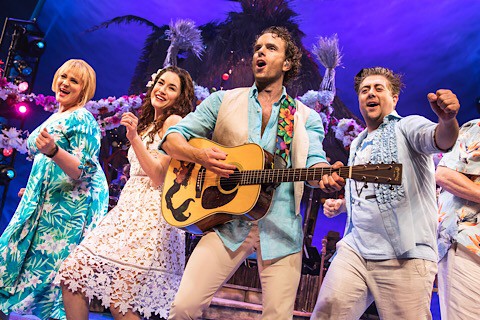 But back to Rachel (Alison Luff). When she first arrives in this oasis of sand, sun, and coconut oil, she’s a real stick in the mud. Make that dirt — she came to collect samples of it from the island’s volcano hoping to generate clean power from potatoes. (This is actually the only feasible plot point. Go, Rachel!) She’s on a bachelorette weekend with her best friend Tammy (Lisa Howard), whose fiancé Chadd (Ian Michael Stuart) relentlessly fat-shames her and is the literal worst.

Will Tammy cheat on Chadd with Brick (Eric Petersen), the resort’s goofy bartender whose drink menu grows more suggestive by the day? (Friday’s special: ‘A Long, Slow Comfortable Screw Up Against A Wall’.) Is Rachel the one who’ll finally make Buffett, er… Tully (Paul Alexander Nolan) want to settle down? Will taking his shirt off help him decide? And will J.D. (Don Sparks), a golden-years stand-in for Buffett (give or take an eye patch), ever put his Viagra to good use?

Who needs a shot? 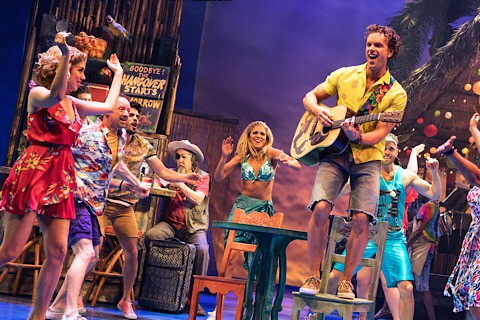 Parrotheads (as Buffett devotees are known) won’t need sobriety for what is essentially 2.5 hours’ worth of winks to his tourist-trap anthems. That darned salt shaker will keep getting lost, and yes, the volcano very well might blow.

Frugally directed by Christopher Ashley (last year’s Tony winner for Come From Away), Margaritaville is a tequila-soaked pageant of board shorts and bikinis, celebrating the sun-baked leisure to which Buffett’s entire catalogue is an ode. Even with revisions to a song like “It’s My Job” that finds Rachel waxing about leaning in, every one of Buffett’s guitar ditties expresses the same essence of “dude, chillax,” with titles like “Havana Daydreamin’” and “My Head Hurts, My Feet Stink and I Don’t Love Jesus.” 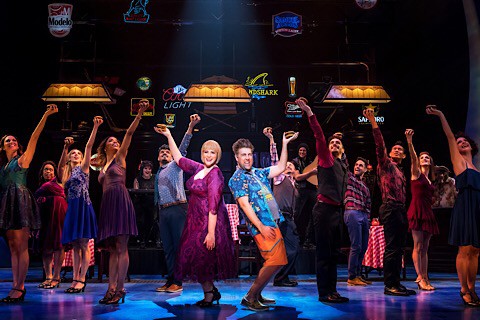 That’s great for the Jimmy brand, less so for propelling a plot or drawing distinct characters. You’ve seen everyone here in any rom-com featuring some sort of vacation. Margaritaville’s all-dude creative team seems to have a taste for flicks where the women put up a good front but really just want to get jiggy after the right number of cocktails.

The musical’s otherwise harmless, if predictable, chase for tail meets appalling ends for the hotel’s Black owner (Rema Webb), a spirited gossip named Marley (after Bob, given her mildly Jamaican accent). Shacking up with J.D. and inconceivably tying off the musical’s love plots, Marley commits to a lifetime of closing her eyes in bed to picture Denzel Washington instead (!). 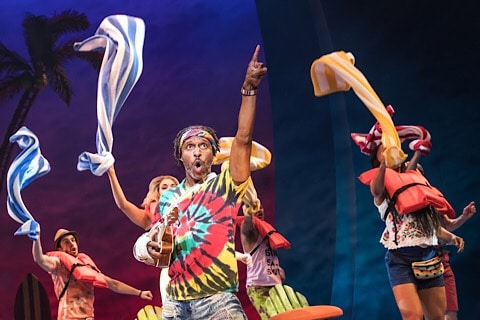 That Margaritaville finds it convenient to casually toss Marley’s desires overboard to balance the ship hardly comes as a surprise. (For a primer on the problematic racial politics of the post-colonial Caribbean, head over to Once on This Island.) As a wise man puts it plainly to Tully, “Acoustic guitar, songs about the beach, hush puppy shoes — white people love that kinda shit.”

As any bartender will tell you, there’s no accounting for taste.

Recent theatre features…
Liberal Guilt Gets an All-White Canvas in Joshua Harmon’s ‘Admissions’: REVIEW
In Stunning New Play ‘queens,‘ Coming to America and Learning to Let Go: REVIEW
Jomama Jones Is a Spiritual Mother for the Moment in ‘Black Light’ at Joe’s Pub: REVIEW
An Outdated Rerun in Off-Broadway Bow of ‘Jerry Springer: The Opera’: REVIEW
Eve Ensler Returns With Breathtaking Solo Show ‘In the Body of the World’: REVIEW
‘Cruel Intentions: The Musical’ Is a Wicked Delight for ‘90s Lovers: REVIEW
How to Save Civilization from Certain Disaster? Take a Cue from ‘SpongeBob’ on Broadway (Yes, Seriously): REVIEW
In Broadway Revival of ‘Once on This Island,’ a Modern Fable, Beautifully Told: REVIEW