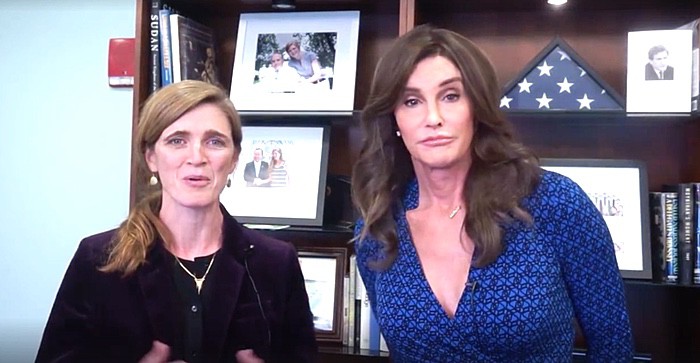 Avowed Republican Caitlyn Jenner met with Samantha Power, the United States ambassador to the United Nations, who praised her for efforts to raise the profile of transgender people.

Wrote Power in a caption accompanying the video:

“Today is International Human Rights Day. At the United Nations, we’re working to integrate LGBT rights into every discussion on human rights, but there is still so much more we can do so that everyone has the freedom to live as they are without fear. It was good to talk to Caitlyn Jenner recently about the important work we can do at home, at the UN, and internationally. Around the world – and here in the US – transgender people face bullying, abuse, and even fatal violence simply for who they are. The threat is all too real for too many: from 2008-2014, over 1,600 transgender people were killed worldwide.”

Oddly, Jenner suggests that she’s “comfortable” with the issues here in the U.S., a remark that won’t sit well with trans activists here who have called her “an insult to trans women” and claim that because of her privilege, wealth and fame she is out of touch with the discrimination, poverty, and marginalization issues faced by transgender women day to day. Her remarks also discount the violence that occurs domestically against trans women; at least 21 murders have been documented in the U.S. this year.

Said Jenner in the video:

“If you look at issues on a worldwide basis, I’m pretty comfortable with the issues here in the United States. We have come a long way, we have a long way to go. We’ve come a long way. But If you look at this on an international level, these issues are huge. I mean, people are murdered, killed, hung over this issue, and it just doesn’t have to be that way.” 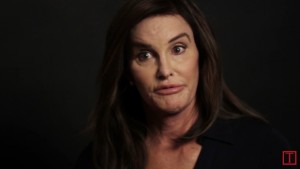 Jenner also spoke with TIME magazine for its ‘Person of the Year’ issue about coming out, her role in the LGBT community, her mission going forward, and (in remarks that are rankling some) what “a good image for this community” is.

“One thing that has always been important for me, and it may seem very self-absorbed or whatever, is first of all your presentation of who you are. I think it’s much easier for a trans woman or a trans man who authentically kind of looks and plays the role. So what I call my presentation. I try to take that seriously. I think it puts people at ease. If you’re out there and, to be honest with you, if you look like a man in a dress, it makes people uncomfortable. So the first thing I can do is try to present myself well. I want to dress well. I want to look good. When I go out, as Kim says, you’ve got to rock it because the paparazzi will be there. The second thing I want to do in living my life authentically is be intelligent on the subject. Hopefully as time goes on I’ll learn more and more and more and get better at that.”

Cosmopolitan‘s Alex Rees is not impressed:

Caitlyn continues with the lazy stereotype of “a man in a dress” making people uncomfortable specifically, this being a long-standing slur thrown at trans women. Newsflash: there’s nothing wrong with a man wearing a dress, whether it’s as part of a transition or just because he would like some fresh air on his balls once in a while — but in certain contexts, the label is hurtful. And Caitlyn is a woman who has dealt with, just to pick one example, paparazzi shooting zoom lens photos of her wearing women’s clothing (this in the weeks prior to her tell-all interview with Diane Sawyer), solely for the purpose of furthering the “man in a dress” narrative in all its clickbait newsstand glory; she notes earlier in the Q&A that, throughout this period, she was “getting destroyed in the rags.” It’s incredible, then, to hear such thoughtless criticism, borderline bigotry, really, from a woman who surely knows how wrong such terminology is. That she’s somehow internalized the slur is unfortunate (but not uncommon among minority communities facing prejudice); that she’s now projecting it upon the trans community at large is unacceptable.

Jenner also appeared in a video for TIME:

Of course, along with claiming that she advocates for the trans community, Jenner has said she still plans to vote for the anti-LGBT Republican Party in 2016 despite a slate of candidates who have been vocal and expressive about their opposition to LGBT issues in recent months on the campaign trail.

A few of the choice remarks from GOP presidential candidates from Caitlyn’s party in recent weeks:

Marco Rubio has said he would reverse Obama’s LGBT executive orders that stop religious business owners from discriminating against gays, appoint conservative SCOTUS justices who don’t believe that gays have the right to marry or that women have rights over their own bodies. He also said any transgender rights laws regarding bathroom usage have got to go.

Ben Carson told a town hall in Waterloo, Iowa last week that he’s against transgender service members and would like to return to the days of “Don’t Ask, Don’t Tell”:

“I do not appreciate using our military as a laboratory for social experimentation. You know, we have too many important things to do. When our men and women are out there fighting the enemy, the last thing that we need to be doing is saying ‘what would it be like if we introduced several transgender people into this platoon?’ You know, give me a break, deal with the transgender thing somewhere else.”

Ted Cruz made his latest attempt to demonize transgender people when he wrongly declared Planned Parenthood terrorist Robert Lewis Dear a “transgender leftist”. He also promised to fight LGBT rights in a recent phone call with right-wing extremists. Not to mention his own anti-LGBT forums.

This is just the tip of the iceberg, of course.

Aside from her privilege, her missteps at characterizing the trans community, and everything else, Caitlyn Jenner’s remarks about supporting the LGBT community will ring hollow until she disavows her allegiance to the Republican Party, which works to demonize LGBT people on a daily basis.