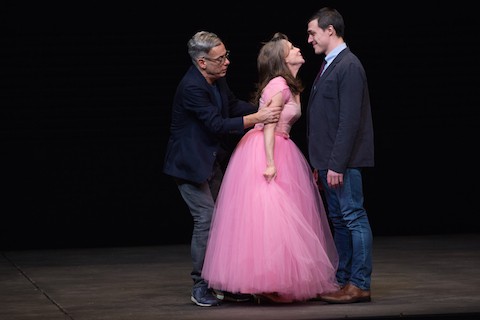 If walking into the Belasco Theatre feels like interrupting a rehearsal for The Glass Menagerie, it’s by design. In Tennessee Williams’ familiar opening lines, the narrator Tom (a rumpled and wonderful Joe Mantello) notes that this is a memory play, so we ought to know upfront “it is dimly lighted,” “sentimental,” and “not realistic.” But director Sam Gold’s stripped-down and finely acted production, which opened on Broadway March 9, is very often none of the above.

For starters, Tom delivers this preamble in the same bright lights under which you found your seat (the prominent lighting design is by Adam Silverman). As Tom promises to present us with “truth in the pleasant disguise of illusion,” there are no signs of illusion to be found on Andrew Lieberman’s spare set — just an empty black stage with a folding table, some chairs, and a gramophone. In his forward to the play, Williams insists directors toy with these ideas of art and reality, and Gold (who won a Tony for directing Fun Home) is certainly game. 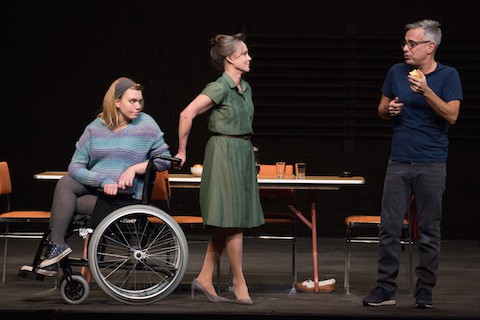 Even Tom’s sister Laura, whose condition Williams describes in the script as crippled from childhood illness, with one leg shorter than the other, is played by a differently abled actress, newcomer Madison Ferris. Nothing about her limited mobility or degree of dependence on others feels like make-believe; Ferris brings to the role a tangible sense of fragility as well as mental isolation, aligning Laura all the more with her treasured collection of glass figurines. 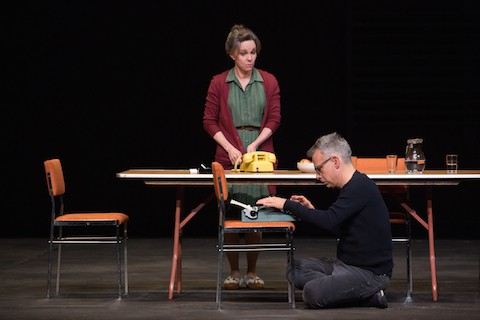 Tom brings us back in his memory to 1930s St Louis. Their father is gone, and Tom pays the bills with a factory job while aspiring to be a writer and escaping nights to local bars (knowing Williams, likely to meet men). Their mother Amanda (Sally Field, in a role she was born to play) frets over Laura, who’s not cut out for work and has never received a gentleman caller (of the sort Amanda loves to remind us, she had to beat off with a stick).

Field, who has been Hollywood’s quintessential mom for nearly three decades, is a marvel to see here. The earnest, doting instincts she brings to Amanda have been a hallmark of her most iconic on-screen roles (see: Steel Magnolias, Forrest Gump, Brothers & Sisters, the list goes on). Perhaps because we’re so used to seeing Field as a mother, Amanda’s grand reminiscing, micromanaging, and investment in her kids’ well-being don’t feel as obsessive or delusional as they did, say, in Cherry Jones’ masterful (and vastly different) performance on Broadway just a few years ago. 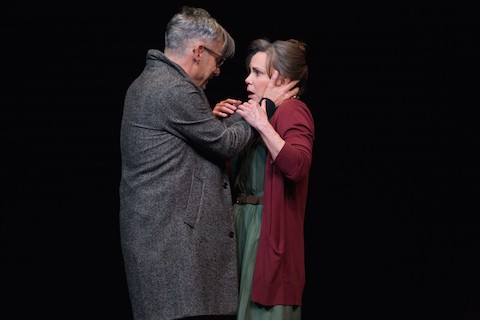 In a certain way, the stakes feel higher here than in John Tiffany’s hyper-imaginative 2013 production. Gold’s bare-stage approach puts the focus on fine performances from the central trio. There is another layer of urgency to questions about Laura’s future, which would seem to add to Tom’s guilt for leaving her behind. But the vastness of the empty stage also swallows up any sense of claustrophobia. And Mantello’s sensitive performance notwithstanding, seeing that Tom grew into a wise adult who seems to be doing okay, it’s hard to imagine he’s spent most of his life running from ghosts. 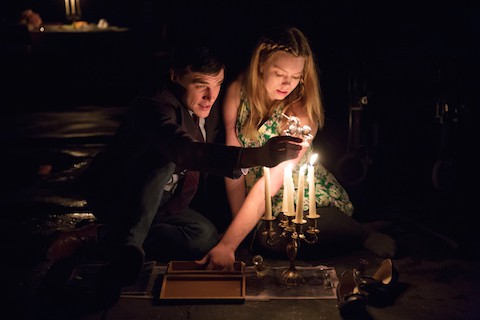 But it’s the play’s emotional turning point, a scene between Laura and her presumed gentleman caller, Jim (here played by Finn Wittrock), that doesn’t quite round the corner to heartbreak. Charismatic to a fault and almost compulsively good-natured, Wittrock’s Jim overwhelms the candlelit scene, which Ferris plays with a more quiet intensity. By the time lights come up a bit too harshly on the play’s final moments, the illusion of truth is gone too soon, and we’re back where we started.