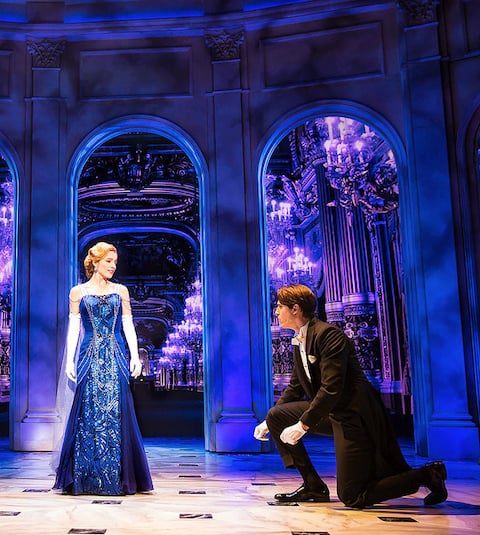 Who doesn’t want to discover they’re secretly a princess and lead that glamorous life? (If anyone tries to deny this flat-out, I’m sorry but they’re lying.) Such is the cloying lure of Anastasia, a new musical that opened on Broadway last night, based on the century-old Russian legend.

Okay, so frenzied legions of teens and young women who grew up on the 1997 animated movie maybe dream of being royalty a bit more than your average theatergoer. (I base this very scientific assessment on decibel levels at the Broadhurst Theatre following pretty any number with a whiff of romance.) All the same, the intermittent pleasures of this bright, historical fairy tale are difficult to deny outright, even for those in deep denial about their own tiara-tinged aspirations. 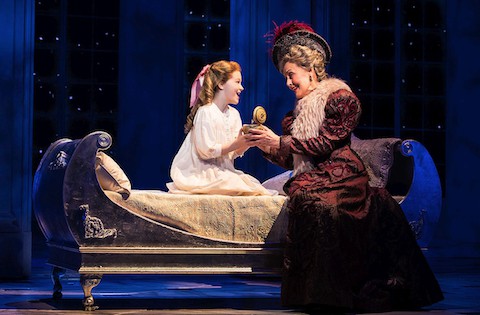 For one thing, in adapting it for the stage, Lynn Ahrens and Stephen Flaherty — whose score for the ’97 film is Oscar-nominated — teamed up with Terrence McNally for a take on the story that’s more history than fantasy. (The musical is also based in part on the 1956 film starring Ingrid Bergman.) There are no evil sorcerers here, just Bolshevists who execute Tsar Nicholas II and his entire family in the Revolution of 1917, ending imperial rule in Russia.

Only his mother, the Dowager Empress (the venerable Mary Beth Peil) survives in Paris — and allegedly, his daughter Anastasia (an oft misty-eyed Christy Altomare). 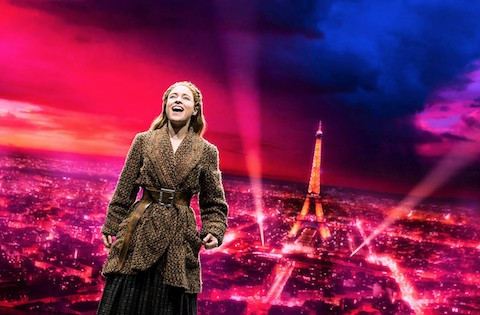 As most fairy tales do, this one begins with tragedy — one hauntingly staged by director Darko Tresnjak — and follows an orphan’s journey to discover her destiny (she has amnesia, wouldn’t you know). Looking to cash in on her grandmother’s reward, Vlad (John Bolton) and Dmitry (Derek Klena) are bent on finding the real Anastasia when they meet Anya, a street sweeper who becomes their Eliza Doolittle of sorts. Dmitry is immediately smitten. 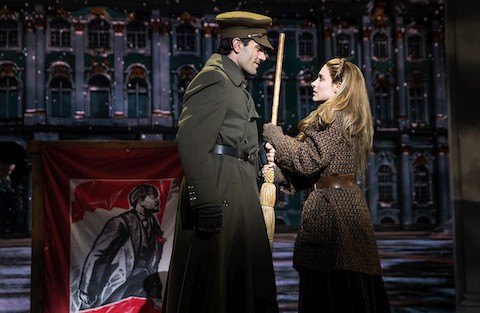 McNally also throws in a love triangle in the form of a Soviet soldier named Gleb (Ramin Karimloo, for whom fainting couches were invented), who’s bent on putting a stop to the search for Anastasia but looks too deeply into Anya’s eyes for his own good. Count him among the villains you root for to get the girl; for his magnificent voice alone, he had my vote. I won’t dash your hopes here, it would be too cruel. 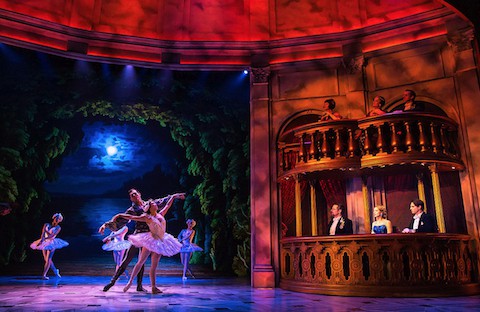 For a Russian epic spanning 30 years, Tresnjak’s staging is mercifully simple and deftly executed. Projection designs by Aaron Rhyne provide vividly animated backdrops that are only occasionally vertigo-inducing, while Alexander Dodge’s versatile, turntable set allows for quick, seamless transitions. Should you feel it for whatever reason, elaborate aristocratic duds by Linda Cho are sure to sate any desire for opulence. 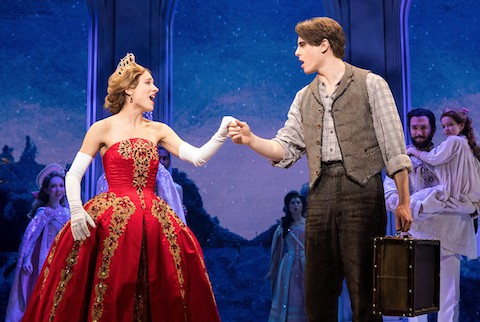 But it’s a bold and appealing score by Ahrens and Flaherty, which includes new songs written for the stage, that makes Anastasia float, showcasing the powerful voices of its cast and weaving memorable moments into a standard fairy tale. Tony-winners for Ragtime (along with McNally), another historical epic, the songwriting duo certainly knows how to scale emotions into infectious and resonant numbers.

Sure, it’s a very surreal time to lose yourself in a Russian fairy tale, of all things. But sometimes, as any princess will tell you, fate chooses you — all you have to do is go with it.

Recent theatre features…
Broadway’s ‘Charlie and the Chocolate Factory’ Musical Is Safe for Diabetics: REVIEW
Bette Midler Is Back on Broadway in ‘Hello, Dolly!’ and You Probably Can’t Handle It: REVIEW
Cynthia Nixon and Laura Linney Tear It Up in Handsome Revival of ‘The Little Foxes’: REVIEW
A Kiss Between Women Ignites Scandal in Stunning New Play ‘Indecent’: REVIEW
In ‘Groundhog Day’ Musical, Not Every Day Is Worth Reliving: REVIEW
Harvey Fierstein Imparts Bittersweet Gay History in ‘Gently Down the Stream’ – REVIEW
Patti Lupone and Christine Ebersole Go Head-to-Head in ‘War Paint’ Musical on Broadway: REVIEW