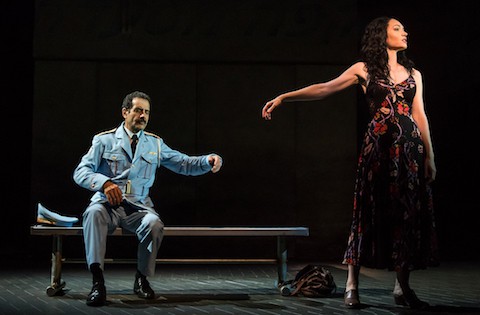 A man stares at a payphone in the desert, waiting all night for his lover to call. Another describes the thrill of spotting his late wife for the first time across a crowded dance floor. Such countless, carefully observed moments assemble like the lines of a poem in The Band’s Visit, an airy and remarkably insightful new musical meditation on loss, connection, and the suspension of hope that opened November 9 at the Barrymore Theatre.

Here’s the set up: A ceremonial police orchestra from Alexandria, Egypt walks into a café. The catch? They’re in the wrong place — the Israeli town where they were invited to play sounds very similar to the tiny one where they wind up, give or take a consonant. 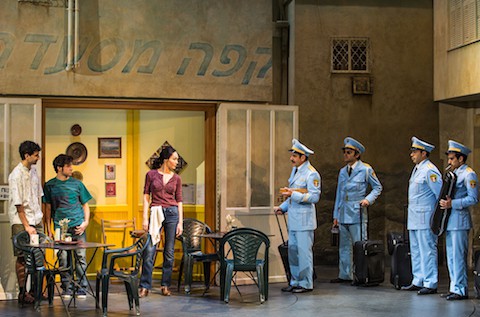 It’s a perfectly indie-movie premise; the show is based on a 2007 Israeli film of the same name by Eran Kolirin. But in bringing it to the stage, first to Atlantic Theatre Company in 2016 and now on Broadway, playwright Itamar Moses and composer David Yazbek challenge the conventions of musical theatre in ways that feel like a fresh reinvention of the form.

Which means don’t come expecting regular old song and dance — the production, detly directed by David Cromer, might better be described as a play shot through with music. In fact, the opening number, an ode to rural ennui sung in rounds by the residents of Beit Hatikva, doesn’t open the show. First we meet the town’s guests for the night, all lined up in powder-blue uniforms at airport arrivals with instruments at their sides. 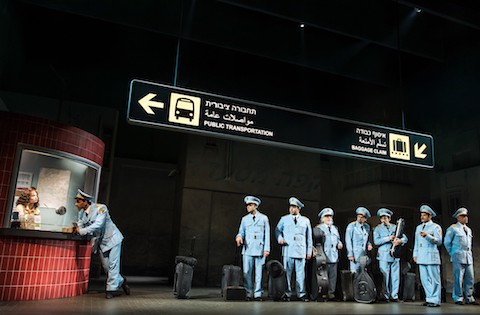 It’s a comedy of communication from the beginning, as the bandmates ask around about how to reach their destination (a question, like so many others in the story, that hints toward the great mysteries of life). As it is, they’re misdirected and taken in for the night by the listless townspeople of Beit Hatikva (they’re meant to be in Petah Tikva). A cozy narrative of hospitality triumphing over difference ensues, not dissimilar, at least thematically, from last season’s surprise hit Come From Away.

The rich (and rife) historical context bridging Egypt and Israel only subtly shades the story, which is intimately human in scale. The orchestra’s conductor (a superb Tony Shalhoub) and Dina, the town’s lithe, sardonic cafe owner (Indecent’s Katrina Lenk, on her way icon status), spark a not-quite-romance. The trumpet player and would-be lothario (Ari’el Stachel) teaches a shy villager (Etai Benson) how to talk to girls. The clarinetist (Alok Tewari) soothes a tense young family at home with his unfinished concerto. 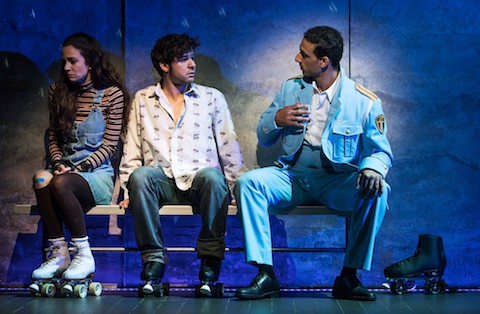 The story might be considered a slice of life, but in the shape of a constellation: one passing night in the middle of nowhere. Music by Yazbek — lyrical, rousing, gentle as desert breeze — doesn’t just punctuate emotional high points (though it does that quite well), but takes on a more visceral role. A handful instrumentalists idly pass the time as musicians might, supplementing the off-stage orchestra with music we can see and feel. 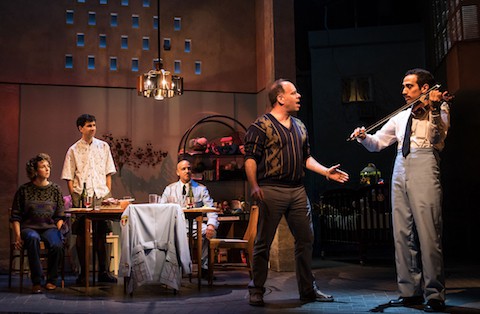 Language, the story argues, is a kind of music, too, perhaps especially if you can’t discern its meaning. That goes as much for the characters on stage as it does for those in the audience who won’t understand the show’s occasional interludes of Arabic and Hebrew. Cromer’s fluid direction, and the soft-midnight atmosphere created by Scott Pask’s scenic design and Tyler Micoleau’s lighting, transport us to a far-flung corner to show us that we’re all the same, simply doing our best to understand one another.

“Has she called?” Dina asks the man waiting at the payphone. “Not yet, but soon,” he replies, holding his breath with the kind of hope that glues the whole world together.