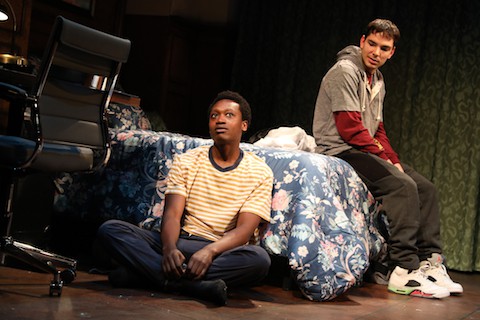 What do you call a second chance when you never had a first?

For two young men at the heart of Transfers, Lucy Thurber’s resonant and thought-provoking new play that opened off-Broadway at the Lucille Lortel Theatre last night, a special scholarship to a prestigious liberal arts college comes to feel like the only shot they have left. In a finely calibrated production directed by Jackson Gay for MCC, Thurber’s play sheds welcome light on the roots of systemic inequality through the lens of distinctly individual human dramas. 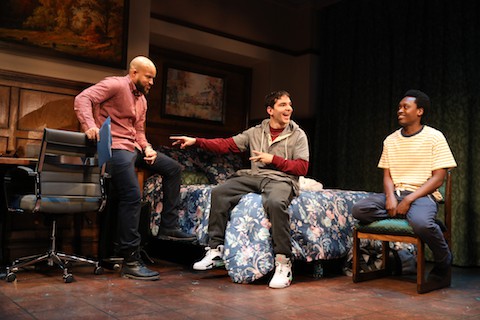 It’s a snowy evening at a small New England motel, where David (Glenn Davis) is prepping two candidates for morning interviews with the scholarship committee at a nearby elite school. David works for Democracy Now, a private foundation where his gig is recruiting students from underprivileged backgrounds gain the sort of access that’s otherwise beyond their reach.

Clarence (Ato Blankson-Wood) and Christofer (Juan Castano) go to the same community college. They grew up across the street from each other in the Bronx, where their acquaintance was tenuous; Christofer is a mouthy star wrestler, raised by his grandmother, Clarence, more bookish and buttoned-up, went to live with his aunt in Brooklyn after falling in with the wrong crowd — and coming out as gay in a neighborhood where being queer is anathema. 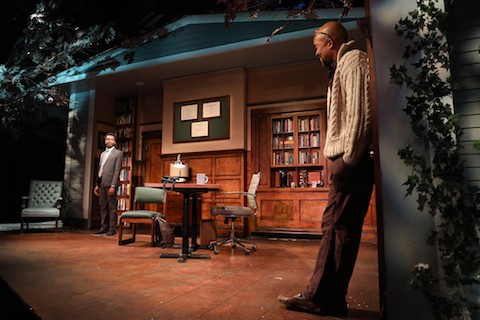 Of the two, Clarence is the very image of a model minority, while the freewheeling Christofer, who feels obliged to tell David that Clarence is “super into sucking dick and shit, like for real” — since the three of them are sharing one room and all — often masks his best intentions behind a disregard for respectability politics.

After a revealing and emotional night in their company, we see each of their interviews the following morning and ultimately listen in on the committee’s decision within the play’s 100 minutes. Gay’s staging unfolds seamlessly on Donyale Werle’s versatile set, which transforms into a handful of different rooms with slight, swift alterations. 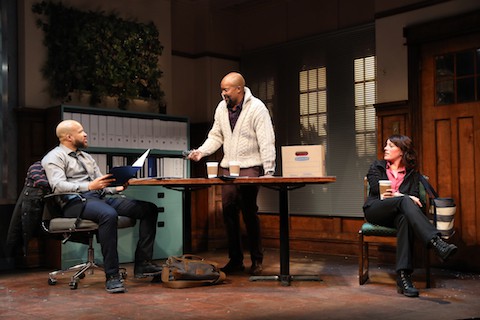 Schematically, Thurber’s nimbly assembled play echoes the application process, while allowing us personal insight into the people who make up the system — from advocates and deciders to the students whose lives might be forever changed by a single opportunity doled out of the course of an afternoon. In dramatizing what may otherwise seem to come down to test scores, report cards, and quotas on the page, Thurber shows how slippery first impressions — and assumptions based on appearance — can be. 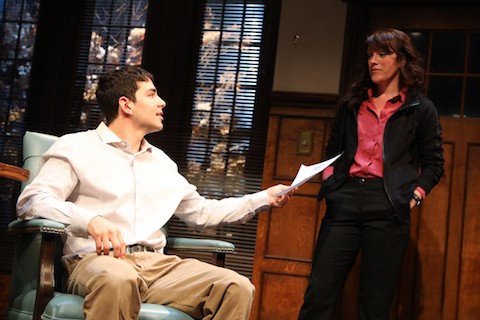 This is particularly true of the play’s standout scene and emotional high point, Christofer’s sit-down with Rose (the school’s rugby coach played by Samantha Soule), which starts out terribly (“You’re kinda acting like a jerk,” she tells him point blank). As the interview lurches forward, they’re revealed to be more alike than anyone might have guessed — in a scene that feels disarmingly frank rather than pat like an after-school special.

When Geoffrey (Leon Addison Brown), the literature professor who interviews Clarence, asks what set him in motion, Clarence confesses that he’s gay. “That’s not — my eyes or my mouth or my mind — but it is the thing, the thing that set me in motion. Where I come from… it’s not something, well, it’s just not. It’s not. And I am,” he says. Clarence’s conviction, as a result of coming out and accepting himself, that “no matter what — there is always beauty” may be the best education of all.

Recent theatre features…
Time’s Up? Not So Fast: ‘Carousel’ Is Back on Broadway: REVIEW
In ‘This Flat Earth,’ Growing Up in the Shadow of a School Shooting
Get in, Losers: The ‘Mean Girls’ Musical Is Fun as Hell: REVIEW
In ‘Three Tall Women’ and ‘Yerma,’ Stunning Portraits of Women on the Verge: REVIEW
Chris Evans and Michael Cera Are Men in Uniform in Kenneth Lonergan’s Superb ‘Lobby Hero’: REVIEW
Andrew Garfield and Nathan Lane Star in Electrifying ‘Angels in America’: REVIEW
A Slushy ‘Frozen’ Opens on Broadway: REVIEW
Jimmy Buffett Serves up ‘Margaritaville’ on Broadway, Tequila Goggles Sold Separately: REVIEW