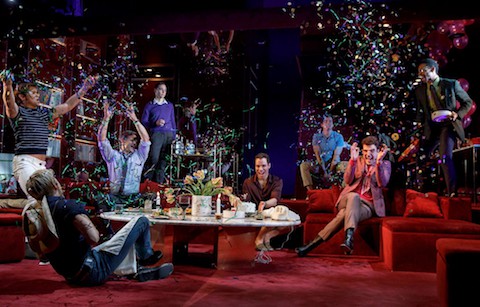 The glass house on stage at the Booth Theatre seems to suggest the most shattering wounds are often self-inflicted, its plush red interior an assurance blood will be spilled.

Director Joe Mantello’s slick 50th-anniversary revival of groundbreaking gay drama The Boys in the Band opened on Broadway tonight under circumstances author Mart Crowley might hardly have imagined in 1968. Its lineup of Hollywood stars — Zachary Quinto, Matt Bomer, Andrew Rannells, and Jim Parsons, currently the highest-paid actor on TV — is more than just reason enough for fans to pony up for tickets. Witnessing a rising class of out A-listers sink their teeth into the self-loathing, shame, and desire that have coursed through generations of gay identity is a truly transcendent experience — even if it doesn’t quite tear up old scars. 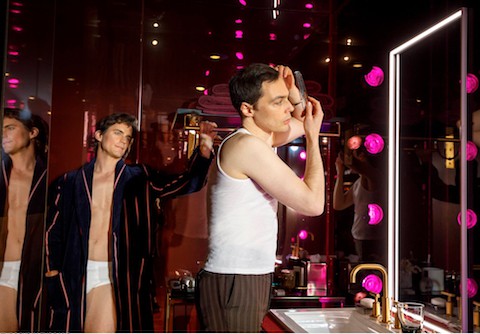 The glossy Manhattan duplex (designed by David Zinn) serves as a vicious playground for tonight’s birthday celebration. Michael (Parsons), our host, ticks about his preparations like a time bomb; Harold (Quinto), the droll eccentric of honor, is going to be awhile. Michael’s onetime dalliance turned pal Donald (Bomer) is the first to arrive — and the first thing he needs is a shower. (Cue a grueling test of attention as he pads around in underwear for 10 minutes.)

The twist: Michael’s school chum Alan (Brian Hutchison) rings in distress, wanting to drop in. Problem is he’s (supposedly) straight, and “Square City” as Michael says, hardly the sort of fox welcome in this henhouse. Alan calls back to beg off, but winds up changing his mind and walking in on a whole string of fairies frolicking in-sync to “Heat Wave” by Martha and the Vandellas. 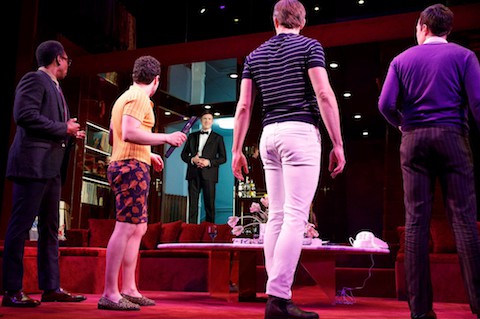 Alan sticks around after his initial shock, warming up to Hank (Tuc Watkins), a buttoned-up school teacher whose wedding ring belies the fact that he left his wife for Larry (tart standout Andrew Rannells). Any hope Michael has of keeping Alan in the dark vanishes in the wake of a flaming Emory (scene stealer Robin de Jesus), two poles of masculinity destined to combust.

Brightened by its attractive stars, the production couches Crowley’s snappy dialogue in a self-consciously retro light, making for easy consumption (Ryan Murphy is among the producers), while often resisting the play’s darkest recesses. When Alan unleashes closeted rage on Emory, or Michael slurs racist quips at Bernard (Michael Benjamin Washington), tension scarcely seems to burn hot before it’s gone. That much of gay culture creates diversion from pain may be part of the point, but here it can be tough to feel the sting. 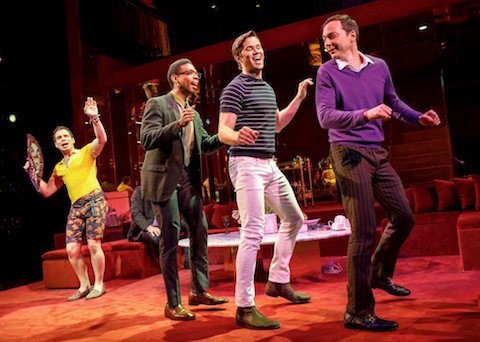 This may be in part because Harold and Michael, the story’s primary vessels of suffering, are too adept at keeping everyone at arm’s length here. “We tread very softly with each other,” Harold tells Michael, “because we both play each other’s game too well.” From his fashionably late entrance, the mask Harold dons for the world over his creams and salves — aloof, acerbic, affected — never drops. Quinto’s high-camp performance, though entertaining, feels less flesh-and-blood than the rest, obscuring any real connections Harold may have to the assembled party. 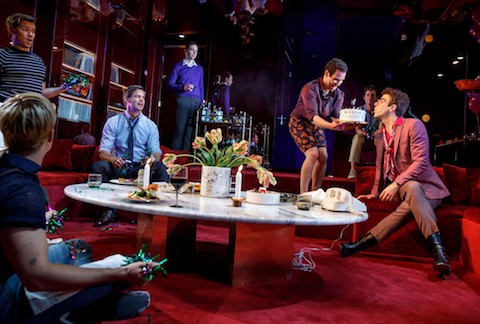 Though it’s Michael’s fierce battle with self-loathing that causes him to self-destruct by lashing out at everyone else, Parsons exudes an innate self-assurance that betrays few hints of vulnerability until it comes flooding out all at once. Even as his character erupts with fury, alcohol rather than bundled up feeling seems to have flipped to switch. When Michael finally collapses in earnest sobs, it’s more of a surprise than the crash of a downward spiral. 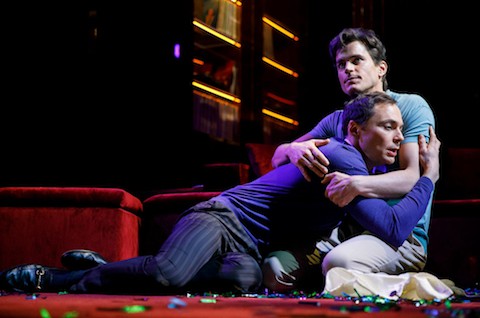 Still, it’s easy to recognize that the venom on Michael’s tongue, born of self-hate and unleashed by self-medication, continues to thrive in back channels, behind a half-century worth of progress. Gay men — in or out of the closet — still struggle to face our fears and desires, lunging for each others’ throats when the real enemy is already inside, or at every one of our doors.

“If we could just learn not to hate ourselves so much,” Michael tells Donald after washing back a Valium. We’re getting there, Michael.

Recent theatre features…
Tennessee Williams and William Inge Spark an Affair in ‘The Gentleman Caller’: REVIEW
How a Masked Man Ignited the Revolution for Gay Rights in ‘217 Boxes of Dr. Henry Anonymous’: REVIEW
The Most Wig-Snatching Snubs and Surprises of the 2018 Tony Nominations
Time’s Up? Not So Fast: ‘Carousel’ Is Back on Broadway: REVIEW
Get in, Losers: The ‘Mean Girls’ Musical Is Fun as Hell: REVIEW
In ‘Three Tall Women’ and ‘Yerma,’ Stunning Portraits of Women on the Verge: REVIEW
Andrew Garfield and Nathan Lane Star in Electrifying ‘Angels in America’: REVIEW

Previous Post: « Betty Who Joins the Fab Five to Celebrate the Second Season of ‘Queer Eye’
Next Post: Samantha Bee: We Spent the Day Talking About One Word, When We Should Have Been Talking About Trump’s Awful Policies »