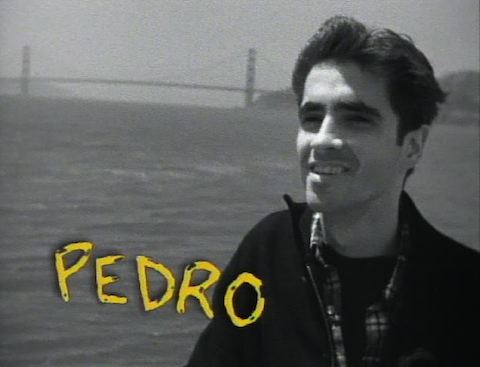 HIV and AIDS continued to ravage the gay community as the 1980s became the 1990s. President George H. W. Bush, who had previously served as Vice President under Reagan, similarly failed to act with urgency to slow the spread of HIV and AIDS.

By the end of the year 2000, more than 747,000 people were reported with AIDS in the United States and more than 448,000 died, according to data from the Centers for Disease Control. Reported new cases peaked in the early ‘90s, due in part to increase surveillance and a better understanding of the disease.

While ACT UP held politicians accountable for their inaction by dumping the ashes of loved ones lost to AIDS on the White House lawn, queer artists brought their stories to the forefront of the cultural consciousness. Throughout the ‘90s, in addition to continued tireless work of organizations like ACT UP, the arts began to demystify and humanize the LGBTQ population living with HIV and AIDS. Films like And the Band Played On and Philadelphia as well as theatre like Angels In America and RENT provided nuanced portrayals of what Pres. Bush cruelly dismissed as a disease that could be easily prevented by changing “behavior.”

On television, Pedro Zamora enlightened a generation of MTV viewers on the realities of HIV/AIDS when the HIV-positive educator and activist joined the cast of The Real World. It was an incredible opportunity to educate the entire country about how HIV and AIDS works, the very real risk it poses to all people — gay and straight — and dispel myths.

Zamora died hours after the final episode of The Real World: San Francisco aired. MTV would later broadcast A Tribute to Pedro Zamora that honored his legacy as a pioneering HIV/AIDS activist and beacon of positive representation of queer people of color. (Pedro was also part of the first ever televised same-sex commitment ceremony.) Even President Clinton recognized his impact with a phone call before his death.

By the end of the ‘90s, awareness, education and advancements in medication finally began slowing the rate of new infections and deaths. High-profile heterosexual cases like Ryan White, Arthur Ashe and Magic Johnson certainly helped, but make no mistake: We would not have seen this progress without the incredible work of brave queer people willing to fight for it.

The ‘90s also marked a turning point in recognizing LGBTQ people as a community, rather than deviants. Groups like Queer Nation utilized direct action tactics similar to ACT UP to fight homophobia. Demonstrations, banners and protests championed LGBTQ visibility and gave rise to the well-known chant, “We’re here! We’re queer! Get used to it!”

On April 25, 1993, the massive March on Washington for Lesbian, Gay and Bi Equal Rights and Liberation made history as one of the largest political demonstrations in history. Police in D.C. estimated the crowd size to be between 800,000 and more than 1 million participants. Speakers and performers included Judith Light, RuPaul, Madonna, Eartha Kitt and Lani Ka’ahumanu.

Both the World Health Organization and the American Medical Association no longer classified homosexuality as a disease in 1990 and 1994, respectively. Corporations like AT&T and Xerox began creating policies and networking for gay and lesbian employees. A 1991 New York Times business column with the headline “Gay Rights, Issue of the 90’s” shared a quote from a gay activist and manager at Xerox:

“How productive are employees who worry about using the wrong pronouns to describe the people they love, who can’t take their partners of 12 years to a company function, who fear that their boss hates gays?”

(That kind of thinking was as shocking in 1991 as it is to think that today, in 2018, it’s still legal in 28 states to be fired due to your sexual orientation.)

President Bill Clinton realized the power of the LGBTQ vote. When running for the highest office in the land, he became the first candidate to openly court the gay vote. Once in office, his record was mixed, at best. On the one hand, he ran an inclusive administration, appointing more than 150 openly gay and lesbian appointees. He also appointed the first-ever openly gay United States ambassador, James Hormel. Conservatives attempted to thwart the nomination, despite his clear qualifications for the job, due to his sexual orientation. Additionally, Clinton was the first president to issue a Gay and Lesbian Pride Month proclamation.

Of course, no conversation about President Clinton’s relationship with the LGBTQ community would be complete without discussing Don’t Ask, Don’t Tell and the Defense of Marriage Act. The former was a deeply flawed compromise that failed to satisfy either side. It ended the ban on gays in the military on the surface, but they would be forced to keep their sexuality secret while they served.

The providence of the Defense of Marriage of Act is bit more hazy. The Clintons themselves have recast it in recent years as a necessary evil to head off a constitutional amendment that would have banned same-sex marriage and made the progress we would see throughout the 21st century even more challenging. (There is a suspicious lack of evidence to support this claim.)

Central to Clinton’s relationship with the LGBTQ community was activist David Mixner. A powerful fundraiser, Mixner became the first openly-gay public face of a presidential campaign under the conditions Clinton increased funding for AIDS and overturned the military’s ban on homosexuality. When instead Clinton crafted Don’t Ask, Don’t Tell, Mixner reacted to this betrayal by speaking out against the policy publicly and organizing a march with the Campaign for Military Service. Mixner made headlines when he was arrested during the march outside the White House.

These political maneuvers were playing out against a backdrop of increased LGBTQ visibility. Jenny Livingston’s documentary Paris Is Burning shared the rich ballroom culture of New York City to a much broader audience. The downtown Club Kids sashayed onto the talk show circuit with RuPaul transcending the trends and becoming a bonafide celebrity with his own talk show and hit single.

Out singers like k.d. lang and Melissa Etheridge dominated the charts and eschewed the sort of hyper-feminine sexuality expected from pop stars. Judas Priest’s frontman, Rob Halford, bucked heavy metal’s machismo when he came out as gay. Wilson Cruz made history as the first openly-gay actor to play an openly-gay leading role on television with his portrayal of Rickie Vasquez on the cult classic My So-Called Life. Shows like Roseanne, Ally McBeal, Party of Five, Xena and Friends featured LGBTQ characters, moments of affection and issues.

No other show, however, had as big of an impact as Ellen. In April 1997, comedian Ellen DeGeneres memorably came out in TIME magazine, stating simply “Yep, I’m Gay.” She’d make history as the first leading character to come out on a network primetime TV series when her character, Ellen, came out to Laura Dern on her eponymous sitcom. This iconic moment would blaze the trail for Will & Grace’s premiere in 1998.

All this increased visibility would be a massive contributing factor the increased acceptance of LGBTQ people. At the same time, it also inspired violent backlash. The 1993 rape and murder of Brandon Teena would inspire the Academy Award-winning film Boys Don’t Cry. Along with the gruesome murder of Matthew Shepard, these horrific attacks highlighted the need for hate crime protections on the basis of sexual orientation and gender identity. In Allston, Massachusetts, the 1998 murder of trans woman Rita Hester inspired the founding of the Transgender Day of Remembrance.

Backlash to LGBTQ advancement  — both the sort of headline-grabbing violence that claimed Teena, Shepard and Hester, as well as the insidious sort of straight-washing done by folks like Rudy Giuliani under the guise of morality — would set the stage for the conservative, post-9/11 world of the early aughts.

This is just a taste of the rich queer history of the 1990s. What were some key moments and important memories we missed? Leave your impressions of the LGBTQ ’90s in the comments below…

Previous Post: « ‘American Circumcision’ is on Netflix, and Its Director Has a Few Things to Say About It
Next Post: Miley Cyrus Performs a Live Cover of Ariana Grande’s ‘No Tears Left To Cry’ — WATCH »